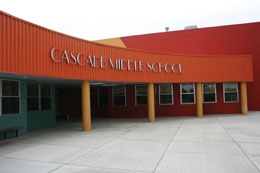 Students and staff returning from spring break at Cascade Middle School in Bend were greeted by new and exciting changes to the middle school, originally built in 1979.

The project, which commenced at the close of school last summer included the construction of a new gymnasium, landscaping on most of the site, a complete remodeling of administration and counseling offices and the addition of some new classrooms on the west side of the building.

“We retrofitted all the restrooms to bring them up to ADA codes,” says Toby Thosath, project manager for Robinson Construction Co. “The project was funded through the Bond Measure with all the other school upgrades that have been going on. This was a CMGC (Construction Manager/General Contractor) project, which means you had to go through a negotiation process for the final award of the project.”

The new gym, which is set up for basketball and volleyball tournaments, will be utilized by the community, Bend Parks and Recreation District and will be available for the use of a myriad of after school activities.

The concrete masonry units are painted in warm, inviting colors of tan and burnt orange with #3-grade maple hardwood flooring. Tetcum panels on the walls provide efficient soundproofing and the new gym, which is situated right next to the existing gym features six basketball hoops and a divider curtain.

Thosath said the band and choir room was completely upgraded, and new acoustical panels on the walls and in the ceiling enhanced the performance of the entire room, making it more user friendly. Furthermore, mechanical systems were upgraded throughout the entire building including low voltage, new communication lines, heating controls and more efficient heating units.

“One of the major aspects with regard to the design was to create a more welcoming entrance which was in concert with a more functional drop-off zone for students,” adds Don Stevens, principal of BBT Architects. “The architectural result was a curved welcoming canopy with new signage, flanked by new facilities for administration and counseling offices.”

Some modifications were made to the fire lane with minor changes in the front parking lot. “The biggest challenge for us was completing the interior work before the new school year started,” says Thosath. “The entire front sidewalk has a new ice and snow melt system installed underneath that extends to the bus lane, so students coming off the busses, as well as those being dropped off in front of the school are safe from slipping on snow and ice. Additionally, we installed more efficient boilers and added a few additional HVAC units.”

Michael McLandress, construction project manager for facilities development for the Bend/LaPine school district shares his enthusiasm for the project, stating, “The transformation of the front entrance of the school is much more accommodating to students, visitors and faculty. We’re very proud of the redesign of the front parking lot and the new gym, and the energy management system in the school was entirely upgraded, so now everything is operating on digital controls. Additionally, there were significant improvements to the Student Resource Center and the Life Skills program at Cascade Middle School.”

Thosath states that school employees and students are pleased with the changes and is very satisfied to report the project was completed on time and under budget.