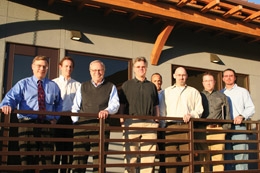 Enticed by the close proximity of the building to the courthouse and City and County offices, the law firm of Francis Hansen & Martin took occupancy of the 4000 square-foot building located at 1148 NW Hill Street in Bend in 2003, when Martin Hansen joined Francis & Martin with an eye towards growth. Originally built in 1993 and formerly occupied by a telephone company, the architecture of the original building on site could best be described as ‘bunker style.’

“The original building was somewhat austere,” says John Kvapil, principal at DKA Architecture & Design in Bend, who, along with partner Phil Doza were responsible for the architectural re-design. “After sitting down with Win Francis, it was clear he wanted to create something very specific to the firm that would also speak to the Pacific Northwest with regard to the materials and the lodge-type characteristics that are not only part of this community but part of Francis Hansen & Martin. We looked at all kinds of lodge-type examples and then wove those back into the design, while at the same time trying to make use of the existing building and make that an integral part of the design as well.”

According to Kvapil, a third floor was added on the addition to the east which was nearly a duplicate footprint of the original part of the building, more than doubling the firm’s square footage. “The challenge was tying the two buildings together so the circulation was very clear and straightforward,” he says. “The idea was to tie the materials in the new addition into the existing building, and we also created a new roof form that has gables, characteristic of buildings in a snow climate, with wood and other appropriately rustic materials. The result was a warmer, more inviting look, which served us well with regard to the desire to make the firm’s clients feel welcome.”

Francis Hansen & Martin chose SunWest Builders to construct the project. “The idea of the addition was to bring in staff who worked in other office blocks away which created a time loss,” says SunWest supervisor Tim Curry. “Everyone was involved with every aspect of the design, so the challenge was to manage the intermingling aspect while creating a cohesive unit people were happy with.”

Francis concurs, sharing the fact that a few employees of the firm spent considerable time designing the reception and work areas and selecting interior finishes. They actually took the plans home, calculating their own measurements and even helped to design the custom furniture by Dovetails and spent time outside work hours to get this accomplished.

“At DKA, we like to get everyone involved who can be,” says Kvapil. “That means everyone feels they’re a part of the process and when they help pick materials, colors and finishes that usually means they know they have been key to the success of the design. The employees here were very much involved from start to finish creating a building that emanated the unique character of Francis Hansen
& Martin.”

Kvapil was enthusiastic about SunWest’s involvement with the Francis Hansen & Martin building redesign, saying, “We worked closely with SunWest on Sage Springs Spa at Sunriver Resort, the NorthWest Crossing Information Center and a number of other projects and knew they were top notch with regard to renovation projects. They kept the project on budget, on schedule and still managed to make the building habitable throughout the construction process.” The partners and staff added that they were impressed with SunWest and Tim Curry as the project manager to accomplish this smoothly, and even made the process enjoyable and exciting for all.

Francis cited several objectives the firm had when redesigning the building. First, it had to be taller, making it easier for people to find. A second objective was to create a pleasing exterior that would be a credit to the community and a third objective was to create a nice living space for everyone under one roof with natural light and warm, inviting colors throughout. Other amenities include additional conference rooms and offices, a lunch room and kitchen and filing rooms on both main floors that feature rolling files.

Kvapil goes on to say the same holds true with the HVAC system, a highly efficient entity in the Francis Hansen & Martin building. The HVAC is concealed in a roof well so as not to be visible. “We wanted the building to have a unique image that fit within the design aesthetic of the Pacific Northwest,” he says.

A tour of the building revealed two separate entrances for each side, a library on the first floor and copy/work rooms on the first and second floors in addition to the aforementioned amenities. The older side of the building received all new carpet and paint, along with a new ceiling, using the same colors and textures as the newer side. As a result of the incorporation of rolling files, there is eight times the filing space as before and the upstairs conference room was designed so that groups of people entering it could do so without disturbing the partners.

Finally, the building has breathtaking views in all directions, and native landscaping with four seasons of color.

Win Francis concludes by saying, “One great credit to SunWest is in the roof well. They noticed you could see it from the parkway, so they stained and wooded it so it blends in with the rest of the building. Overall, the building completely serves our needs, everyone is together and it makes the firm more efficient.”