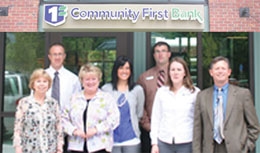 Prineville-based Community First Bank, a division of Prineville Bancorp. (OTCBB: PNVL.OB), opened its newest location earlier this month, affectionately known by company officials as the Mill Quarter branch, on Bend’s west side at the corners of Colorado and Arizona Avenues.

There are plans to hold an open house on July 24, even though the new facility is already open for business.

This is the second full-service branch location for Community First Bank, founded in 1980 by private investors. The 6,500-square-foot, two-story building will be home to 16 to 18 employees, many of whom are already reporting to work in the spacious, comfortable office spaces, most of them upstairs where tall, magnificent windows provide plenty of light, as well as wide views of the daytime sky.

The Mill Quarter branch is on track to receive a Leadership in Energy and Environmental Design (LEED) Gold Certification from the U.S. Green Building Council, a coalition of building industry leaders that strive to promote environmentally safe places to live and work, according to a Prineville Bancorp news release.

The building features innovative designs in energy conservation and responsible building construction. Highlights include a solar panel system providing more than 12 percent of the branch’s annual electricity needs, a monitoring system that allows customers to view real-time renewable energy production at the bank, as well as occupancy sensors and dual-ballasted lighting controls in all offices that help reduce energy use while giving workers more control over their lighting needs, according to the press release.

Among many other “green” features, the new facility recycles more than 75 percent of the items on site as opposed to disposing them in local landfills, and a certain percentage of recycled products were used in the construction process, Community First Bank President and Chief Executive Officer Robin Freeman said.

“We’re so excited not only about the launch of this new branch in the Mill Quarter neighborhood, but also about the opportunity to build and operate using environmentally responsible practices,” Freeman said. “We believe that environmental sustainability is important to our customers and our community. Our employees are very proud to work in a green facility as well.”

The idea was to create an open space where customers and bank employees feel comfortable, Steele said.

“For instance, the fireplace you see next to the main entrance, we wanted a living room feeling – an entry room concept that feels inviting much like a house would,” Steele said. “That way, when a customer is waiting for a loan officer they will be in someplace that is comfortable, much like you would in a home.”

Freeman, who has served as the bank’s CEO since August 2003, said Community First decided the time had come to expand its operations and open a new location – the original branch sits on Greenwood Avenue in Bend – because demand was outpacing the company’s ability to service all of its customer’s needs in one location.

“We felt that this location between downtown Bend and the Old Mill District fit with our need to provide customers with more convenience, as well as providing us with additional visibility within the community,” Freeman said. “We also had a vision of combining our loan office with retail services so that customers will have access to all of their banking needs in one location.”

The new branch offers full-service personal and business banking, as well as commercial and mortgage lending services. The detached drive-thru facility, which opened for business back in late 2007, is open on Saturdays and an ATM machine provides customers with 24-hour access to accounts.

Shares of PNVL, which are traded on the Over The Counter Bulletin Board, ranged in price from $8.40 to $14.76 per share over the last 52 weeks, and recently traded near $8.75. The company has a market capitalization of $21.97 million with revenues of $10.29 million. Prineville Bancorp reports operating margins of 23.59 percent, and profit margins of 16.49 percent.