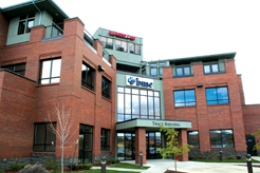 The prognosis for broader access to medical services in Redmond now looks a lot rosier with the completion of a new 18,000-square-foot Bend Memorial Clinic facility on Veterans Way.

The expanded state-of-the-art clinic near Fred Meyer is over three times the size of BMC’s former Redmond location on Canal Boulevard and includes advanced imaging, labs, urgent care and specialty practices. The move is seen as a progression of the group’s comprehensive patient-centered philosophy, branded “TotalCare” – which now extends to 100 providers and 350 staff offering treatment over five locations across Central Oregon.

In addition to a primary care core of family medicine and immediate care – supported by imaging services such as computed tomography (CT), X-ray and ultrasound and in-house laboratory capability – specialty services moving over to the Redmond site include nephrology, oncology, ophthalmology and pulmonology. Other new specialty services also arriving encompass allergy, gynecology, nutrition and rheumatology. A sleep lab will be added this summer and pediatrics will be coming on board in the fall.
A grand opening is set for Saturday May 22, with activities and an open house from 11am-3pm offering the public the opportunity to tour the facility and find out more about its widened scope.
BMC CEO Marvin Lein said: “This is an exciting time for us as we ready to better serve all of those who have been driving to Bend for care over the years, maybe have never established care with a local Redmond physician or are simply looking for something new.

“For years we have been caring for Redmond patients. We are now able to bring our commitment to TotalCare closer to patients in their own community.”

Redmond Chamber of Commerce president Eric Sande added: “BMC’s expansion of medical specialties in Redmond will be more convenient to residents who would have to otherwise traveled into Bend for those services. It truly is a win for the Redmond residents.”

The move will also free up appointment slots in Bend as the BMC clinic there
nears capacity.

BMC executives have aimed for an enhanced presence in Redmond as part of a strategic long-term plan for the region and decided to look for an existing building that could be customized, as a more cost-effective and quicker option than a “build-to-suit” from the ground-up, route.

After a thorough search, the management team and their real estate professionals identified the steel-frame, concrete masonry exterior constructed property at 865 SW Veterans Way, owned by local developers John and Jill Pavlicek, as the optimal fit.

The building featured two levels, designed for general commercial office use, which were in a shell condition awaiting tenant improvements, and a third floor housing residential condos.

BMC Chief Operating Officer Randall Avolio said: “The beautiful design and location really sold us on the building, especially as it is so accessible and close to population centers.

“The Pavliceks and the design and construction professionals were also wonderful to work with and helped ensure we achieved the best project possible.”

Lein said: “As a family-owned business, D.E. Rink won the bid, combining both fair pricing and expertise in meeting a very tight timeline for opening. Their quality of work and attention to detail has been second to none and have kept us on schedule.

“In addition, there were a number of subcontractors on the job and at the height of the project 85 people were on the job site with another 50 or so in administration, engineering and other support roles backing them up. I’ve never seen so many contactors from different companies work so harmoniously together toward a common goal. It was truly impressive.”

Avolio said that from the outset there was a collaborative team effort to optimize design and functionality in the new space, with input from a number of parties including the management team and a whole range of BMC operational and facilities staff as well as the architectural and building professionals.

He added: “We went through the process several times to make sure we had unanimous support on how the vision was to be realized.

“We were striving for something with a better flow that included the appropriate aesthetics and feel as well as offering the best possible patient care in a pleasing, inviting environment. We really dug deeper into what we wanted to see to ensure that our total care model was reflected in the project.”

The second floor accommodates fully-equipped exam rooms for specialist treatment and a spacious infusion room that also incorporates a balcony. An anti-coagulation department for cardiac patients, which often necessitates frequent visits, is also seen as a boon for local residents in comparison to multiple trips to Bend which were previously typical.

Compatible art work, hand-picked by BMC’s CEO is also prevalently displayed throughout the facility.
The new clinic will add about 25 jobs, with some staff who already reside in Redmond switching from BMC’s Bend base. Specialist providers and clinical managers will also rotate through the site, which also offers room for future expansion.

The unity of the building cooperative effort even extended to the Pavliceks occupying one of the rooftop condos during the construction process.

Project Manager Rick Stilson said: “It was great to work so closely with John and Jill on site and they were continually approachable and accessible.

“This was a first-class creative and collaborative team all around, and it was also beneficial that we have worked on a number of medical-related projects, including several with BMC since the ‘90s, as well as with many of the same subcontractors from previous projects.

“It was important to us and BMC that there was a consistent feel to the facility, compatible to their other sites in the region which are also all linked electronically, and streamlining achieved for optimal design and function.

“The City of Redmond was also phenomenal to work with, especially since the phased permitting approach we employed to expedite the process – given a relatively tight project timeframe of under six months – entailed us asking for a lot of stuff in short order, even down to coordinating finals regarding inspections to meet the construction deadline.”

Project Architect Don Stevens, of BBT Architects, added: “There was something of a design challenge in fitting everything that the clinic needed into a relatively tight site, including accommodating the logistical needs of the advanced machinery within that geometry. But we were able to address all the requirements in a creative manner, including incorporating glass break-out areas to increase usable space.

“It was also beneficial that some time ago BMC decided to decentralize the check-in and sign out functions for each department, which also helped with utilization of the available space.

“BMC’s Facilities Manager Nate Starr was also great to work with and we had a wonderful experienced overall team involved to ensure the space was maximized and flowed well.”