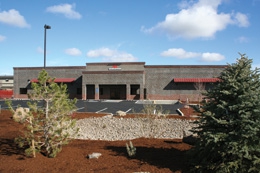 An even smoother flow for a host of popular drink products is in the pipeline following the unveiling of Western Beverage’s state-of-the-art new distribution center in Bend.

WB is the Oregon distributor for Anheuser-Busch and craft breweries such as Widmer, Red Hook and award-winning Firestone Walker, out of central California, as well as imports like Stella Artois.

Previously, the company operated out of a warehouse on SE 9th Street, but decided to buy a site off 18th within Bend’s burgeoning North East industrial area to create a cutting-edge “cross-dock” facility to better serve a Central Oregon coverage area which stretches across a large swathe of the state – from Burns to the east, Hoodoo to the north and Diamond Lake Junction/Chemult to the south.

A cross-dock is a facility that transfers items between carriers or vehicles with minimal use of warehousing in between, which can prove valuable for increasing speed to market.

In WB’s new Bend branch this means products can be received overnight from the company’s Eugene base and be transferred across multiple loading bays directly on to local route trucks for delivery. The key element is stationing incoming and outgoing vehicles in close proximity and having a loading operator in place to meet high inventory velocity goals.

The team assembled for the “design-build” construction project included Bend-based HSW Builders and LB Engineering, who worked closely with WB and toured its Eugene headquarters in the early planning stages to help fine-tune ideas for optimal features and functions in the new branch.

A lobby area includes an office and small dock that can accommodate draft sales to the general public (Mon, Wed 3-5pm and Friday 2-4pm) while the opposite wing houses a sales/conference room with hi-tech audio-visual equipment to assist with training, as well as break-out areas for sales team workstations.

The central loading area features multiple receiving and shipping docks arrayed alongside each other fronting a relatively shallow rectangular configuration, as well as a ground level bay for smaller vehicles and special event trucks.

WB Bend Operations Manager Jason Rickley said: “When a customer is set up with an order, which can be transmitted wirelessly by our merchandisers, it is attached a sequence number and the corresponding products are picked and palletized in Eugene.

“The orders are loaded in reverse, so they can be unloaded directly on to local trucks in the correct sequence when they arrive at night in Bend.

“It is all about maximizing efficiency, and focusing on moving product in and out of the warehouse in the most cost-effective, efficient, and timely manner possible – while providing the services customers demand – which is especially important when you consider we have six routes covering a distribution area of around 18,000 square miles.”

The operation is a kind of “hub and spoke” arrangement, where materials are brought in to one central location and then sorted for delivery to a variety of destinations. Products are shipped directly from sources such as Anheuser-Busch’s Fairfield brewery in California to WB’s Eugene base before being sorted and moved to Bend, one of eight WB branches throughout the state, for expedient distribution to customers.

Rickley said the operations approach:
– Streamlines the supply chain from point of origin to point of sale;
– Reduces handling costs, operating costs, and the storage of inventory ;
– Means products get to the distributor and consequently to the
customer faster.

The “one-touch” model – where products are touched only once, as they are received and loaded outbound without being placed on the warehouse dock – is considered the highest velocity “load-as-you-go” method regarding cross-dock productivity.

Bordering the Bend facility loading area is a draft repair/utility room – where, for example, taps can be rehabbed –a large walk-in cooler, a point-of-sale storage room housing items such as promotional, signage and display materials, and a delivery department room. Here, merchandisers and drivers have their own areas accommodating computers which are also used for downloading orders and printing off invoices on thermal paper in the field.

Bend WB Branch Manager Craig Grim said that although the facility had only just opened in early April after receiving final permits, it was already proving a boon to operational productivity and efficiency, while also accommodating room for future growth.

He said WB was always looking to add customers and compelling lines, adding that the company was excited to announce the availability of products from the Firestone Walker brewery, following a successful introduction in Washington and Northern Oregon.

“We have had great success already in the Portland market and look forward to bringing our beer to new areas in the rest of beer Nirvana,” said David Walker, Firestone Walker’s co-proprietor, while WB General Manager Brian Belobradic added: “We are making beer history with partnering up with Firestone Walker and their phenomenal beers.”

Established in 1996 on California’s Central Coast, Firestone Walker began with a commitment to producing world class pale ales, and it remains the only American brewery to ferment beer in a union of oak barrels.

The Bend project broke ground in September 2009 and was completed in a relatively brisk timeframe, ready for official opening in early April.

HSW Project Manager Bret Matteis said: “This was a wonderful collaborative effort where the whole team was focused on how to best facilitate flow and function, and was a great experience with a great client.”

Best efforts have been put forward to cover every detail for the new facility, including an extensive snow-melt system featuring underground tubes containing glycol-antifreeze beneath an expansive truck turnaround concrete apron accessed via an automatic gate.

Matteis added: “We really aimed to put together a cross-dock facility as efficiently as possible and started from scratch to design from ‘the outside in’ even beginning with how best to optimize the layout and orientation on the building site.”

HSW Project Superintendent Dan Ashby also hailed “a stellar team” with invaluable input from everyone involved going in to the finished product.

Green elements have also been incorporated into the project, with Rickley adding that chemical-free water-based cleaning products were being used for floor scrubbing, and that trucks were clean air-certified. Sustainable, low maintenance “zero-scape” landscaping was also in place.

Lennie Brant, principal of LB Engineering, who was involved in the design engineering component of the process and who has worked on a number of buildings in the north Bend industrial area, said: “WB were great clients and had looked for a custom-build opportunity as part of their plan for long-term growth and stability in Central Oregon.

“They were looking for this facility to be more efficient and functional and also wanted to continue to expand their involvement in the community. They are very positive people and a lot of credit goes to the whole team involved in this project in realizing the vision of what was a great project.

“One aspect of the process involved touring the Eugene facility, which is an impressive example of latest practices, and we wanted to bring the same capabilities to central Oregon, although on a relatively smaller scale.
“We tried to mix efficiency and technology in terms of the goal of moving product in and out to customers expediently. WB is also really employee-oriented and also wanted a facility that was comfortable and functional for staff.

“It was rewarding to work with everyone involved. We tried to address how every space could be efficiently used, and I think we achieved the aim of a modern, compact facility which is one of the best examples of its type.”