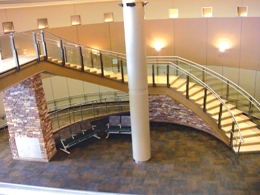 If you haven’t been to Redmond Airport for a while you’re in for a horizon-expanding experience – following the near completion of a $40 million project that has taken the cozy but often cramped terminal from almost 23,000 square feet to over six times that size on three levels.

A recent ribbon-cutting ceremony hosted by City of Redmond Mayor George Endicott saw a number of individuals instrumental in cultivating the concept to fruition – among them Oregon Democratic Senator Ron Wyden and Airport Manager Carrie Novick – in attendance, celebrating a state-of-the-art facility that should accommodate future growth for decades to come.

In-keeping with its original style, the entrance to the terminal looks much the same, with its green roof and lodge-style rock walls, but subtle touches that aid the overall passenger comfort experience abound – such as added insulation, a roof trough to block snowfall from the exterior walkway and roomy revolving doors that also help minimize drafts commonplace via the old sliding set-up.

Once inside, the soaring entryway leads to a significantly wider ticketing area with spaces allocated for an increased surrounding concessions presence, set to also include news and gift shops and a children’s play area. Some 20 check-in stations now allow each airline to have its own individual counter, with room for more carriers as necessary in the future.

A beefed-up security area incorporates post-9/11 requirements such as blast-resistant walls and reinforced safety glass, but one of the biggest transformations is in the pre-board passenger waiting area.

Before the remodel, it was often standing-room only during peak periods in the one-bathroom, sole boarding wait space. Now, passengers have two roomy departure areas to choose from, featuring triple the restroom capacity.

A sweeping curved staircase leads to an upper floor featuring expansive views of the airfield and skyline beyond, with additional concessionaires anticipated to include a bar/restaurant presence. Deschutes Brewery had been slated to provide such a facility, but other local operators have challenged the request for proposal process as not having specified a secure-area opportunity, with the possibility that the selection search may be re-started.

In the transition from airfield to terminal, incoming and departing passengers now mingle in a glass-enclosed hallway that protects travelers from the elements while also shortening the walk from interior to runway and offering multiple entry gates.

The building incorporates much use of the underlying traditional structural steel and concrete components typical in an airport but in this case generally masked by the Northwest-style design aesthetics. Meanwhile, a number of environmental and energy-efficient highlights throughout the revamped terminal include solar panels, floor-based air displacement systems and “hydronic” water heating pipes embedded in concrete slab snaking around the building perimeter.

Novick paid tribute to the efforts of a host of individuals and groups who collaborated to fulfill the vision of the facility – completed in time for Redmond’s 2010 centennial celebrations – which would take care of both current transportation needs and those of the future. She also praised the airport staff’s consideration and cooperation in keeping the facility fully operational during a construction timeframe spanning almost two years after ground was broken in June of 2008.

The last configuration of the terminal had been in place since 1993, and was designed for smaller capacity planes than many now seen at Roberts Field. Today, the airport caters to around 45 flights a day, including links to Seattle, Portland, Eugene, San Francisco, Las Vegas, Los Angeles, Salt Lake City, Phoenix and Denver. More than 230,000 people flew out of Redmond Airport last year.

The building expansion’s costs were some fifty percent covered by state and federal grants, with the remainder coming from bonds to be repaid via the City-owned airport’s future revenue.

At the opening celebration Senator Wyden, who has been a long-term stalwart supporter of the cause, paid tribute to Novick’s perseverance in continually making the case for better transportation infrastructure.

He said: “In my travels – I am after all 3,000 miles from Washington D.C. – to town hall meetings and the like, I am in and out of a number of terminals and fully realize there are few jewels like this.
“It is also a great catalyst for economic growth – when companies like Facebook look at our area as a location one of the priorities is such a transportation lynchpin.

“We all know Central Oregon is a rare place and when passengers land they can see a facility compatible with such a first-class destination. This is a great example of smarter and better ways to deploy government funds.”

Principal Architect Terry Bulfin of HNTB Corporation said early discussions on the expansion master plan made it clear that there was a high degree of satisfaction with the look and comfort of the existing facility. With this in mind, there was care to continue that theme in the new iteration, reflected in the design and use of materials that fitted conceptually with the image of Central Oregon and the airport’s position as a ‘gateway’ to the area.

He said: “When we considered design approaches, it was important to maintain that compatible feeling. For example, when you enter the main concourse, though it has been remodeled it has the same spatial qualities.

“Some of the physical constraints included trying to use as much of the existing facility as possible and utilizing a fairly concise building envelope from the entry to the existing apron. But we were able to maximize the usable footprint though extending upwards, via the mezzanine, and below grade.”
Bulfin said the remodel created a “more intuitive pathway” for passengers through the creation of functional blocks. A more defined arrival, or non-secure, zone lies to the west of the building and departure/secure sector to the east, with both areas tied together by wood ceiling elements and natural stone continuing the “lodge-feel” evident in the original space.

One element of the revamped facility that received particular attention was a streamlined baggage handling area. From the ticketing area bags drop via a belt to the subterranean screening area, with a separate conveyor for oversized luggage including skis and golf clubs often transitioning through a facility such as Roberts Field, which has a “Resort Airport” classification. A more seamless and efficient transfer of baggage also includes more under-roof coverage to minimize impact from the elements.
Bulfin paid tribute to the top-quality professional involvement of contractor Kirby Nagelhout Construction and on-the-ground architectural administrator Jim Barber, whose Bend-based BBT Architects firm was also involved in the prior facility’s design.

KNC Project Superintendent Dave Armstrong said one of the biggest challenges was working around an occupied facility and ensuring airport operations continued to run smoothly during construction.
He said: “There was a lot of improvisation and we carried out construction in phases to minimize disruption and ensure everyone from the airlines to airport staff, car rental carriers and the TSA, continued to be fully functional.

“This was an exciting project to be involved with and featured a great team approach. Everyone was wonderful to work with, including the design team, the City of Redmond, airport staff and the Federal Aviation Administration (FAA). This is a facility we can all be proud of.”