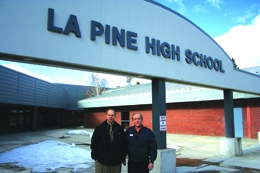 A new 6,596 square foot wing adds four new classrooms as part of a Bend La Pine Schools District initiative which also encompasses major renovations including a remodel of the commons and library entrance.

Funding came from the $119 million bond for capital projects passed by voters in 2006 and officials were delighted to report that the La Pine High project was delivered well under original budget estimates.

The new addition was designed to blend sympathetically with existing classrooms and has the added benefit of providing a number of additional exterior covered areas to shelter student traffic.

“One of the needs identified was for more gathering areas for our growing student body,” said Principal Jay Mathisen. “The remodel is proving popular in serving that purpose in the commons and library area – which includes a coffee shop – and it certainly seems to have encouraged more study and relaxation in the media center.

“When the new addition took shape there was also a recessed area remaining which was adapted to add another bonus ‘hang-out’ area that our students utilize and appreciate.”

The ability to transition into the new learning environment has also opened up expansion possibilities in the older wings, particularly for the vocational technology curriculum including automotive and a forestry program “acknowledged as one of the best in the North West”.

Contractor for the project was Kirby Nagelhout Construction Company, with design provided by BBT Architects of Bend, which has won multiple accolades due to a reputation for combining aesthetics
and functionality.

Principal architect Ron Barber worked on the original design for La Pine High, which was dedicated in 1981, and has been involved in the long-term development and expansion of the campus, including the school’s ‘black box’ theater installed several years ago.

The black box concept harks back to experimental theater’s roots of a simple, somewhat unadorned performance space, in this case a large square room with black walls and a flat floor, designed for flexible staging techniques.

The seating is typically composed of loose chairs, which can be easily moved or removed to allow the entire space to be adapted to the artistic elements of a production.

The space is versatile and easy to change, and is also utilized by the wider La Pine community for arts and events, while providing infrastructure for up-to-date sound and lighting techniques.

Barber said: “As with previous elements that have been added, the goal with the new addition was to harmonize relatively seamlessly with the rest of the educational environment, while also offering a freshened up appearance, and I think that aim was achieved.

“This is a cool campus, making much use of natural vegetation on an expansive, relatively low density site, and we wanted to continue to build on the overall theme while also creating needed extra class space and more hang-out areas to offer even better amenity.”

The project was completed in a relatively swift seven-month timeframe and Mathisen commented that as well as being aesthetically pleasing, the improvements had boosted function and smoothed the school’s flow. Students were also highly appreciative of the end result.

He added that the next stage of work around the campus would include updating the football stadium and bleachers, paving, ADA access and security upgrades.

The project comes amid a flurry of activity in the educational sector for the newly-incorporated city of La Pine, including a new elementary school going up and the middle school also receiving some long-needed work.

The new $8.5 million elementary school, located on Burgess Road at the north end of town, is set to open in fall 2010 after the school’s original construction was slowed early last year when the district had to spend more than $1 million to extend sewer and water lines to the site.

District spokeswoman Julianne Repman said by scheduling the opening for later this year, every aspect of the school, including the fields and playground, will be completely finished when students are enrolled.

Once the school is up and running it will have major implications for education in La Pine. Currently, fifth-graders attend La Pine Middle School because of crowding at the elementary, which is also part of a fairly unique setting where these and the high school site all adjoin.

“It will be an immediate pressure release,” said Repman, as fifth-graders would be able to return to the elementary environment while much-needed space will also open up in the middle school.