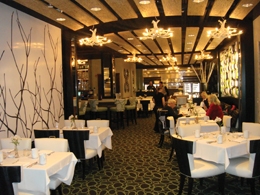 O can stand for many things – from original to outstanding, optimistic and (native) Oregonian all of which could be said to be embodied in the hip, stylish new Oxford Hotel which has upped the ante for Bend’s evolving and increasingly cosmopolitan downtown scene.

The $12 million 59-room upscale boutique hotel, fronting Minnesota Avenue between Lava and Bond, opened its doors to the public this month as the flagship facility of the family-run Oxford Hotel Group, which is headquartered in Bend and owns and operates the Oxford Inn and Suites chain.

The 17th and latest entry in the group’s portfolio – which stretches from California to Oregon, Washington and Idaho – represents its first foray into the boutique realm, and the location may be seen as a fitting context for the signature statement, given the ownership’s local roots.

The seven-story hotel, designed by GGL Architecture, features extensive use of exterior brick and stone on the lower levels, in keeping with the surrounding streetscape, with an art gallery and salon bookending the ground floor, while a more contemporary feel is displayed on the set-back upper three floors.

Any conceptions that the street level exterior motif implies general traditionalism are turned on their head as soon as guests enter and are struck by a chic urban lobby.

Oxford Group Design Coordinator Cheri Krogman has utilized an eclectic collage of materials throughout the interior, including metal art fixtures such as a silver tree stump table surrounded by white fabric chairs forming a cozy conversation area in front of a Zen-style fireplace in the lobby. The concierge check-in area is equally sleek and welcoming, with cushioned chairs and lower level desks adding to the relaxed, sophisticated ambience, tied together by an extensive dark-toned native wood narrative.

The unique style, blending the indigenous and modern, is continued with textured finishes to walls and an impressive entry to the basement level, featuring an urbane seating area and a large photographic mural of Proxy Falls, in between a 2,000 square foot banquet room and the feature restaurant and bar area known as “10 below” – perhaps a multi-faceted reference to the subterranean locale, the street address (10 NW Minnesota) and the sometime local winter temperature exemplified by last month’s Arctic blast(!).

The hotel’s website bills The Oxford as a “hip urban oasis in the middle of the great outdoors” and that motto is borne out by the 75-seat restaurant, where lodge-type timber touches juxtapose stunningly with mod elements like ceramic antler-cluster chandelier light fixtures amid a palette of cool earth-tone, cream and mint green hues.

Typical prospective guests may be seen as travelers seeking properties that are noticeably different in look and feel from branded hotels.

Boutique hotels first came into vogue in the early ‘80s with style, distinction, warmth and intimacy key words in the new genre’s architectural and design lexicon, aiming to attract a niche of customers looking for a special and differentiated property able to fulfill their individual needs.

SITING THE PROJECT
Jim Landin, project architect with GGL, said his company first got involved with the project back in 2004, preparing schematics for the Baney family (owners of the Oxford Hotel Group) in response to a Request for Proposal from the City of Bend for redevelopment of the former municipal-owned site, which now adjoins the Centennial Parking Garage and the mixed-use Putnam Pointe project.

He said: “The City originally was looking to incorporate more retail and office on the site, but, as deliberations progressed, realized the merits of the hotel concept, especially in terms of room tax revenue.

“There were substantial design changes over time compared to the original concept, including going from six to seven stories and adding the basement.

“One of the challenges was the narrowness of the site; which necessitated essentially a one-sided building looking to the south, with single-loaded corridors and no openings to the parking structure side, while also allowing for larger rooms and extensive mountain views.

“Everyone involved was conscious that a boutique hotel needed to have a unique character and quality and this is like no other hotel product in Bend.

“Being owned by a local company, there was also a goal of putting an individual stamp on the project and I think there has been a tremendous amount incorporated into that building.”

Landin said the use of brick and stone at the base ensured that the building fitted contextually with the historic feel of other structures in the street – such as the St. Clair Place and Fire Hall developments – and the “heavier” elements of the lower levels were balanced with the lighter touch of the upper floors, and the relief between the “east and west wings” featuring much use of glass and recessing.

He added: “We wanted to match the scale of the other buildings in the area. I think kudos should also go to the city in allowing other people to run with their ideas as far as the future look of the downtown area – after all they could have just filled the entire original site with a parking structure.
“The presence of this project and others in the area has made great strides in identifying the feel of Bend’s downtown and we are excited to be involved in the city’s continuing design evolution.”

Krogman echoed Landin’s sentiments, adding: “We wanted to create a feel of walking into a unique and different atmosphere, with cosmopolitan city-style elements, while still being in Bend and linked to its character.

“We undertook a lot of research to find unique products as well as sustainable materials, including the fabrics and wallpapers.

“There are many environmentally-friendly features incorporated in the entire project, and I have even heard the hotel referred to as ‘eco-chic.’

“In terms of design, there are traditional Western-style and modern elements that we have fused and it was really a fun project to bring together those references.”

The Oxford Hotel’s General Manager Ben Perle said the facility was designed with a host of energy and resource saving benefits in mind, including dual-flush toilets and electrolyzed water replacing the majority of the previously chemical-based cleaning products.

He paid tribute to the design and execution of the Oxford’s concept, observing that it successfully provided a cosmopolitan ambience more commonly found in Europe or larger cities in the U.S., while also retaining numerous references to the Central Oregon area.

Perle grew up in both France and San Francisco and attended Catering School in France before obtaining a masters degree in hotel management from Cornell University. He gained hotel and restaurant experience in Paris, (working for Disneyland Paris for a time), as well as the United States.
Perle relocated to Bend in 1997 and joined the Baney Group in 2008 after spending nearly a decade at Sunriver Resort, most recently as director of operations.