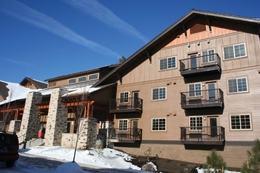 An early Christmas present has arrived for seniors eagerly anticipating the opening of a phenomenal new affordable independent living community in Bend, offering the prospect of priceless memories for generations of families for many years to come.

The finishing touches have just been made to the 53-unit Discovery Park Lodge, catering to those in the 55+ age group who meet certain income thresholds and conveniently located in the popular NorthWest Crossing neighborhood.

The facility has taken almost five years to come to fruition and demonstrates the incredible amount of thought, creativity and care that the development, design and construction team put in to a concerted effort to maximize quality of life components for prospective residents and visitors – while still delivering a budget-conscious package.

Everything from the detail of the lodge-style theme – evocative of National Park Service Rustic architecture seen in landmarks like the famous Ahwahnee resort hotel in Yosemite, or the El Tovar at the Grand Canyon – to the incorporating of many sites for relaxation or social interaction has been incorporated into the finished product.

Other features of the three-story 76,000 square foot complex – offering  well-appointed one and two-bedroom apartments – include underground secured parking, a fitness room, library, computer areas with free internet access, a spacious front porch, outdoor decks, upper-floor balconies with expansive mountain views, and a courtyard facing north across from a future 20-acre park, tentatively named Discovery Park and planned to be reminiscent of downtown’s Drake Park as part of the mixed-use area’s continuing evolution.

The project has been pioneered by Pacific Crest Affordable Housing LLC – headed by John Gilbert and partner Rob Roy – and funded through a mix of tax-credit driven private equity together with a combination of federal, state and city sources. It builds on the group’s success with a similar concept – the Mountain Laurel Lodge along Bend’s Century Drive.

Gilbert said: “With post-World War II development our country’s population became somewhat spread out and this is about bringing family groups together.

“We also tapped into a trend of parents moving to the Central Oregon area to be close to their children and part of the aim of this project is to help bring generations together – we have been gratified to see four generations walking down the hall in our facilities – and providing a safe, affordable place for seniors to live.”

Gilbert has harbored a desire to be involved in the affordable housing sector since graduate school, seeing it as an important component of his development career. Roy has witnessed his own parents aging and the challenges they have faced finding appropriate housing. Both Roy and Gilbert as well identified it as a pressing need for the wider community.

A wealth of thought has gone into creating the optimal environment at Discovery Park Lodge. Gilbert said: “Our research showed that there are problems in the contemporary world with seniors being socially isolated, especially in garden-style apartments, so, for example, our building has interior hallways and diverse common areas so seniors can randomly and readily interact.

“Having more social interaction has been proven to promote health and well-being and an important goal for us is to help people to live independently and retain their dignity longer.”

Part of that philosophy extends to the placing of community rooms where residents can host a pot luck or birthday party, while there are also more private areas like the ‘Osprey Nest Library’ read-
ing room.

The facility also allows pets, albeit with certain size and weight limitations, as another outlet seen as important to facilitating overall well-being and companionship.

Gilbert added: “We typically see residents in ten-year increments – from 55-65, 65-75 and 75-85+ – and it is interesting to see the younger ones help out the older in taking out the trash and so on. There is a real degree of communal cooperation that evolves.”

He said that the facility also employs an on-site resident manager who spends a lot of time providing services including checking on residents’ welfare through regular face-to-face meetings.

Gilbert said his group’s affordable housing properties have become progressively more green-oriented and sustainable – including native landscaping and a roof-mounted solar thermal system at Discovery Park Lodge that heats most of the building’s hot water needs.

Rent is also closely regulated, providing peace of mind for residents as their rates are “not subject to the whims of the market”.

Gilbert also hailed the location near Summit High School for its convenient proximity to amenities, including being within walking distance of medical facilities, shopping, restaurants and trails as well as Bend Area Transit bus stops.

The opportunity for the site came to light back in 2005, in part due to NorthWest Crossing’s developers West Bend Property Company specifically wanting to see affordable housing elements included in the overall mix, as reflective of the wider population of Bend.

One of the notable features of Discovery Park Lodge is a welcoming downstairs lobby room complete with fireplace, as well as a large common room with warming kitchen and state-of-the-art audio- visual amenities on an upper floor.

All units have washer/dryer hook-ups as part of a suite of modern appliances, or residents can choose to take advantage of a communal laundry room.

He paid tribute to the co-operative team effort of all involved, including GGL Architecture and the developers, and was pleased to report that the originally-conceived 14-month project was brought in “on-budget and a month ahead of schedule – which proved a nice Christmas present”.

He said local materials were used wherever possible and sustainable elements incorporated throughout – including installing recyclable ‘cradle to cradle’ carpet and even harvesting wood from on-site for decorative log work in the building. The exterior also features eco-friendly native landscaping with minimal irrigation needs.

Principal Architect Jim Landin said that after the decision was made to create a lodge style a lot of research was conducted on the historic lodges of the North West to pick up visual and design references.

He added: “The process also featured much consultation with the developer and contractor to refine our goals and achieve the overarching vision within budget constraints.

“We were also conscious of creating a personal scale and, for example, the community room offers a cozy feel while also being able to accommodate all residents in a group setting.”

He said that extra insulation was incorporated throughout to maximize energy efficiency, including a high ‘R-50’ thermal insulation rating for the so-called “cold roof” – offering double the insulation and ventilation that code requires – and that the whole building was framed in a way designed to heighten insulation qualities.

Other elements aimed at maximizing function include every tenant having additional storage spaces, including closets in the garage area, and the provision of highly secure, 24-hour controlled access.
Gilbert added:  “From the outset it was decided that the overriding style we were looking for was lodge-like.

“When you think of larger historic buildings in the rural parts of the North West, the lodge-style comes to mind, such as Crater Lake, Timberline at Mt Hood or the Great Hall of Sunriver on the site of the former Camp Abbott.

“It seemed an appropriate theme, often associated with a place to relax after a day of activity, and we tried to reflect that wherever possible, including the provision of elements like the communal lobby fireside area. Art work by local artists depicting local scenes and a general lodge style also reinforces the ambience.

“Also, we can extend the lodge metaphor as a place to relax for people who have paid their dues to society and who may, due to a variety of reasons, not be in the best economic shape.

“We are delighted in how wonderfully the team worked together to realize the vision and this is a really beautiful building that fundamentally accomplished all our goals to provide an appropriate quality of life for its users.”

The complex is already seventy five per cent leased, with applications invited for the remaining units. The development group is also nearing completion of a similar project in La Pine known as the Little Deschutes Lodge.

Discovery Park Lodge is open to residents with up to sixty per cent of Deschutes County’s median income and is professionally managed by Cascade Management Inc. For details go to www.cascade-management .com or www.discoveryparklodge.com.