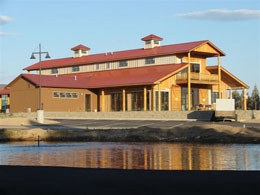 A spiritual oasis has sprung up in the high desert with the opening of the Catholic Diocese of Baker’s new retreat center in the rural community of Powell Butte.

Tucked away at the corner of Powell Butte Highway and Alfalfa Road amid 38 rolling acres with panoramic mountain vistas, the complex features a conference center, church, bunkhouse-style cabins, Bishop’s residence and guest house in a tranquil pastoral setting.

A major aim of the project, constructed on the grounds of the former “Two Bar” ranch – which was purchased for the redevelopment in 2006 – was to accommodate youth camps, as well as retreats and seminars, and one feature of the new site is a campfire circle in a natural amphitheater-like style.

Walking trails and water features also dot the sprawling campus, while future plans include conversion of a five-car garage into a recreation center and a one-time pole barn into a maintenance shop.

The centerpiece conference center is named after Pope John Paul II, who is the Pope with whom a vast majority of today’s young adults and youth have grown up.

The main structure was converted from a horse barn – complete with stalls, tack room and hay loft – which had also accommodated living quarters for the previous occupants.

The high-ceilinged animal lodging has been transformed into a gathering place for larger meetings, and incorporates a commercial-grade kitchen to fuel the anticipated steady flow of visitors.

Three other smaller sections, two upstairs in the former loft and one downstairs, can be utilized for seminars or smaller group gatherings.

A concerted effort was made to preserve as much of the external appearance as possible, accenting the rural nature of both the Diocese – which covers 66,000 square miles, largely east of the Cascades – and the facility.

The interior has been significantly remodeled, but here, too, attempts were made to preserve the original wood paneling and beams.

The title for the Church, Saint Mary’s, was chosen in part because there is no Church in the Central Oregon tri-county area dedicated to Mary.

The design goal was to have something “suitably devotional” while at the same time welcoming, attractive and somewhat rustic in nature to reflect the camp setting.

Inside, the tabernacle – housed in a stone apse – the Cross and the Stations of the Cross hangers are made of juniper harvested from the Diocesan property near Bend.

The cross was, in fact, one of numerous items crafted by current Diocese of Baker Bishop, Bishop Vasa, an accomplished woodworker who was hands-on in many aspects of the project, exemplifying a “can-do” attitude instilled by his Nebraska farm upbringing.

The section of the project designated as “Camp Connolly” is named after former diocese head Bishop Connolly who pioneered the Youth Camp Program more than 35 years ago and who long harbored a dream of having a dedicated Diocesan destination.

There are five duplex cabins, giving a capacity of 80 beds.  Each cabin is named after a pair of Saints and has a different form of Cross built into the floor.

Mounted on the walls is a brief biography of the individual honored Saints, as well as a description of the floor cross; part of an overall theme of providing an ongoing education in the lives of a great number of Saints incorporated into the entire complex.

The bunk beds in the cabins were made by Diocese facilities manager Joe Hayes and Bishop Vasa, with much volunteer help from Diocese Development Director John Schiemer and his son Jordan.
As with other buildings, there was a desire to preserve a rustic appearance while making sure that the units were both durable and attractive.

Alongside the cabin cluster is a separate additional shower/bathroom facility and several RV parking spots with hookups, for families who prefer to travel via campers.

Behind the cabins is an interconnecting trail which winds through the junipers and also accesses the future Youth Activities Center which is currently used for storage and maintenance.

There is also ample scope for playing fields in the grounds, with ongoing future projects including the building of a water slide and water play area.

A “Staff House,” which can be utilized by camp organizers, has also been known as “Retreat Rooms” for individuals or small groups seeking quiet days at the Center and even “motel six,” since there are six individual rooms each with two twin beds, private restrooms and shower.

The end room opens to a small conference area where six to 10 retreatants could readily gather for discussion or private prayer, while mountain views make setting chairs out on the deck an attractive possibility.

The decision was also made to consolidate the Bishops’ residence with the rest of the Catholic Center, partly on practical note since the Bishop is committed to attend numerous envisaged events at the site.

The house provides, besides the Bishop’s private room and office, two guest rooms mostly for visiting priests who often stay with the Bishop for up to three weeks while undergoing Diocesan orientation.  It also provides a dining room for gatherings of priests or laity and sets apart a devoted space for the Bishop’s Chapel.

An ample deck allows the Bishop and his guests to enjoy the great natural beauty of the countryside with the Cascade Range in the background.

Architect John Kvapil, who designed the project along with fellow DKA Architecture principal Phil Doza as the latest entry in an extensive resume of ecclesiastical-related work, said: “It was an express goal to reflect the history of the Church in general, and that of the Diocese of Baker, together with the rural character of the Powell Butte area, in particular.

“We wanted to create a presence unique to that site and something that fitted with the beautiful and dramatic scenery of Powell Butte and its historic ranches.

“In regards to the church, we adopted a primarily neo-Gothic style common to historic churches in the countryside. We also wanted to create the appropriate feeling of entering a sacred space that instills a sense of awe and reverence as well as welcome and comfort.

“At the same time, we wanted to wed the overall site to the area’s tradition, including using indigenous materials and construction styles. We saw the whole complex as relating to the traditional rural architecture of the West, and to Central Oregon and Powell Butte in particular.

“For example, the individual cabins are patterned after the historic ranch bunkhouses and great national parks seen in this part of the world.

“In years to come people will look back and hopefully admire that there was the foresight to build such a facility, which also provides an apt visual connection to the entire Diocese area.”

Kvapil added that the scale allowed for privacy in a ranch setting and the whole project – with its attention to detail and quality – was hoped to enhance the look of the area and be perceived as “a gift to the Powell Butte community which will be there in perpetuity.”

“Everyone, including the construction specialists of Kirby Nagelhout, was involved from the early stages and it really was a dream team and a delight to work on the project from day one.”

Doza commented on the personal touches which were prevalent in, and added to, the project, including the warmth of the hand-made bunks crafted by Hayes and Bishop Vasa from Central Oregon wood.

He added: “The Bishop played a huge part in the project and deserves a lot of credit for directly participating in the process and being invaluable in terms of guidance, approval and vision.
“He was also very conscious of the area and incorporating local connections, such as using local talent, materials and contractors.

Kirby Project Manager Brian Powell concurred that the project was “a great team effort” that blended well with the natural landscape.

John Schiemer said: “This is really something people can call their own, and is also relatively convenient as sixty per cent of families within the Diocese live within three hours of the new facility.”

“The entire site is one of great natural beauty and is already attractive as a quiet, out of the way place.  Over the years new trails will be developed and various prayer shrines, grottoes and statues will be established.  Like all of us, the work here is ongoing and ‘in process’.

“We do hope that many people of the Diocese make regular use of the grounds and especially the Chapel and come to think of this place: a place apart, a desert place, as a kind of spiritual home where body, mind, heart and spirit can find rest and peace.”

In a special part of our region where the fresh air is filled with the scent of junipers and sagebrush and the Three Sisters peaks are visible, “it quiets the spirit in a lot of ways,” said Bishop Vasa.

He is aware that many Oregonians have left religion behind and chosen nature for their devotion. “It’s not an either-or,” he contends. “It’s a both-and.”

Bishop Vasa, who has spent several years promoting the site, gathering donations and even doing much manual labor himself, added: “I believe that the Powell Butte project is ultimately about the greater good of souls and that, to me, is a project worthy of effort, sacrifice and perseverance.

“The Diocese of Baker has never had its own retreat center, that specified place where more intense spiritual exercises can be conducted and experienced.”