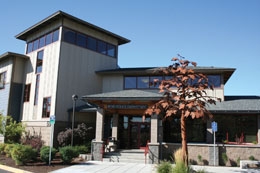 Bend’s City Police force is looking forward to smoother functioning thanks to a major new addition to its headquarters off Highway 20.

The 19,000 square-foot three-story project includes more room for evidence processing and storage, expanded administrative office areas and a new Municipal Court, which can double as a self-sufficient Emergency Operations Center (EOC) in times of crisis.

The City of Bend Police Department was located in downtown’s City Hall until 2002, when the first phase of the headquarters, incorporating a 28,000 square foot building, was constructed at the intersection of 15th Street and Highway 20 to better accommodate all police business.

A second phase was envisaged over the longer term as part of a 10-20 year master plan, but as the City’s population swelled exponentially in the middle of the decade, creating the need for additional staff to serve the community, local government officials gave the green light to fast-tracking the new wing.

BPD Administrative Lieutenant Ken Mannix, who acted as building liaison during the recent construction process, said station staff welcomed the increased scope for operations to relieve what had become somewhat cramped conditions, adding: “Before, we had more officers than computers and people doubling up in offices for duties like report-writing, but the expansion has given improved working conditions, plus room for future expansion.

“For example, previously we had to rent additional space off-site for some evidence storage but now we have ample room to cater to anticipated needs right here which means cost savings and increased efficiency.

“We have 84 sworn City officers, plus four new hires coming up, which represents a ratio of 1.06 officers per 1,000 and which is proportionately less than many other jurisdictions, but we have had something of a challenge just keeping up with the population growth.”

One component of the remodeled facility involved the expansion of the evidence processing and storage areas, critical to the “chain-of-custody” rules that require an unbroken trail of accountability regarding the movement, location and security of physical evidence from the time it is obtained until the time it is presented in court.

Officers coming in from the field can place evidence directly into various sized secure units which can be accessed by analysts from a rear lockable door before being transferred to detectives and then on to tightly-controlled storage, including a reinforced basement area under the court room.

(One interesting side note to the building and its particular use is the appearance of hip-height buffer sections along hallway walls to protect against scraping by holstered guns.)

Another feature is a new, secure entry way that will make it safer for officers to escort prisoners in their custody in and out of the building rather than through an open parking lot.

The ‘sally port’, as the entrance structure is called, is like a small garage attached to the building. An officer can drive the patrol car into it, close the door behind, then transfer a person in custody into or out of the main building in the security of an enclosed space.

Architect John Ralston, who designed the project together with Leslie Hara Shick, said: “In the early stages of the process, we sat down and really listened to representatives of each department to ensure we could optimize efficiency of the building to best cater to the various requirements.

“And we came into this with no preconceptions because each jurisdiction has its own particular needs.”

Ralston said one primary part of the project was the new in-house Community Court, or Municipal Court, which provides a local forum for the resolution of minor traffic infractions, parking citations and city ordinance violations issued within the city limits.

Some three times larger than the previous location at Bend’s City Council chambers, it has upgraded audio visual systems, security and condensed records storage, plus the ability to be sealed off from the remainder of the building.

It has also been set up to act as an Emergency Operations Center if the need arises. An EOC is a central command facility responsible for disaster management in an emergency situation to ensure continuity of operational decisions.

Ralston said: “We have a back-up generator in the event of a power failure and connectivity through fully wired stations around the courtroom to provide for rapid communication to accommodate the various agencies that may gather in an emergency situation, such as Police, Fire, the Red Cross and National Guard.

“There are also fully-equipped carts kept on-site which can be simply wheeled in to the EOC to allow for rapid deployment.”

Project Manager Bret Matteis, of HSW Builders, said the construction included much use of timber, glue lam beams and masonry veneer on the exterior, with the ruggedness of the materials complementing the surrounding mountain environment and further integrating the Police Station with the community. Ground was broken in November 2007 and the work spanned a 14-month time period, including employment of sustainable practices wherever feasible.

He added: “One of the primary challenges of the project involved the scheduling of the work due to the 24-hour nature of the department’s occupancy and the need to ensure continuity of their operations at the site during the remodel.

“We employed kind of a ‘hopscotch’ approach, to minimize impact on the building’s function, where as soon as one area was completed it was occupied and then we moved on to the next phase.
“It was quite a logistical feat, but the station workforce was very cooperative and everyone bought into working together as part of a great team effort. The amount of planning, preparation and coordination of all the parties involved ensured this ended up being a seamless project.”

Ralston added: “Part of the original goal articulated by former Police Chief Andy Jordan and maintained by his successors included the desire that the building not look like the stereotypical police building where there is often much use of steel and something of a ‘cold’ feeling.

“He wanted more of an approachable atmosphere and I think we achieved that in the end result, reflected by the design flow and the use of materials in keeping with the local environment.

“The building provides a secure home for the Bend Police Department as well as a welcoming interface between the department and the community, and room for growth to serve the city’s needs for many years to come.”