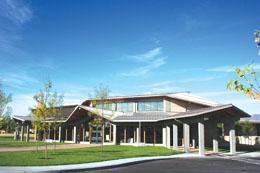 A labor of love has come to fruition off Bend’s 27th Street with the completion of the new St. Francis of Assisi Church, featuring breathtaking deep-hued stained glass windows and massive sweeping beams to provide a fitting new house of worship for the town’s Catholic congregation.

The $5.2 million project is the culmination of a 15-year vision to create a new facility always anticipated to follow, and tie in with, the school and pastoral offices which were constructed as part of the original master plan.

The 17,000 square foot octagonal-shaped structure can accommodate 800-plus people in the main Nave, while a lobby, or Narthex, area is able to boost capacity by another 200.

The old downtown location off Franklin Avenue, which could hold around 350 parishioners, will now be known as “the historic church” and primarily be used for weekday services as well as some weddings and funerals.

Bob Becker, of Washington-based architectural firm Becker Architects, said the substantial new venue achieved the aim of a sense of “permanence”, in part by utilizing stone walls and a heavy timber roof.
He added: “We wanted a strong and bold structure that looked like it was built to stand the test of time.

“The whole group effort has also really reflected the goal of providing a spiritual place of peace and joy to all those who use the Church.”

The entry to the church is approached from the east, with a covered walkway allowing parishioners to be dropped off on the north side.

The main materials for the exterior walls are cream colored masonry with the surfaces ground to expose the natural aggregates and give a granite-like appearance.

Exposed heavy timber beams and decking make up the roof structure. The beams, visible both at the exterior and interior, pay homage to the wood timbers used in boat building, said Becker, with a design element reference to the early Apostles who were fishermen among the early Christians.
On the south side of the entrance is a small chapel, dedicated to Our Lady of Guadalupe, intended primarily as a place of quiet prayer and meditation.

Once inside, one of the eye-catching features is a large, stone baptismal font that sits in the main aisle and has removable gates, while visitors are also struck by the sight of a pair of 135-foot long, 6-feet tall glue lam beams rising to the highest point of the ceiling, above the Sanctuary platform, and resting on imposing concrete columns at either end.

Kirby Naglehout Construction Project Manager Joe Waggoner commented: “The glue lam beams, which are among the biggest ever seen in the state, had to be Kevlar-reinforced to help with their considerable span, and our Project Superintendent Alec Hanson did a fantastic job in, among many other things, pouring those 60-foot concrete forms.”

Waggoner added that block, concrete and natural materials were also much in evidence, including copious use of Douglas fir, native stone and exposed aggregate flooring.

The massive masonry walls have concrete ‘hinges’ at their ‘bends’ with small openings allowing natural light to fill the interior of the church, while brilliant stained glass windows dominate the East and West-facing walls.

The West window provides a high backdrop to the Sanctuary area and the Crucifix, with a cross rendered in red and purple with a blue background, while also allowing light to stream in from the setting sun.

On the opposite side, the East window is divided into three panels depicting a dove, wheat and grapes in a modern style and reflects lighter hues from the early-morning light.

The church also features a large organ that can be played electronically, or with pipes that are expected to be installed later this month.

Waggoner said the recently-completed project first broke ground in June of last year and challenges included working through the winter and the sheer scale of the building work.

He added: “With most of the beam work reaching from 35 to 50 feet, you are spending a lot of time in the air.

“This was also something of a different project compared to private development in that there are a lot of people emotionally and financially invested in the project.

“We are proud to say that the Diocese is a repeat customer and it was wonderful to work with them and the building committee. They are remarkably positive and it was really enjoyable interacting with such an intelligent and committed group, along with the rest of the team who ensured this project turned out fantastically.”

One of the committee members, John Schimmoller, who liaised regarding much of the contracting work on the church’s behalf, echoed the sentiments, adding: “Many intricate elements that were part of the project may not be immediately obvious to the public, but they involved incredible attention to detail and contributed to the overall success of the construction.

“Execution of the vision all-round was magnificent and a lot of the materials were very much in-keeping with the environment and the beauty of what God created.”

Becker Architects team member Tanja Reeves, who has been involved with the overall master planned project from its inception, said: “It was wonderful working with members of the congregation and experiencing their sense of community. Their connection with the process and the building as a place of worship is embodied in the project.

“We worked with a great team including incredible artists to help realize this vision, and this project was a wonderful example of bringing art and architecture together.

“This is a very dynamic space, especially with the inclusivity of space and light and I think we are all proud that the varied kit of parts came together in a seamless whole thanks to a lot of hard work, planning, cooperation and dedication.”