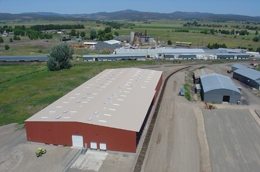 With the help of a $3.5 million Connect II Oregon grant, construction of the 64,000-square-foot, monster addition to the Prineville Freight Depot wrapped up about a month ago and the facility’s doors are now open, bringing with it hope for a new, profitable day at the municipal-owned railroad, and increased economic development for the surrounding region.

“It was a great project to be a part of, working with the City of Prineville and Freight Depot personnel,” said Glenn Miller, project manager with HSW.

“Just the size of it and the fact that it went up in the middle of winter created some interesting challenges, such as having to do the slab in three pours so that it didn’t freeze, but it was really nothing worse than anything else you will find in construction project in Central Oregon in the middle of winter.”

Prineville Freight Depot Business Development Manager Dale Keller said where the railroad had just one or two customers a few years ago – at its height in the late 1970s and early 1980s there were more than 10,000 annual transfers compared to just more than 80 a couple of years ago – the Freight Depot now has a client list of 24 companies.

Given that the economy is chugging along, the fact that the facility is continually making progress and growing in operational volume is testament to the city constructing a first class facility, observers say.
“What we’ve done is we’ve embraced the regional concept,” Keller said. “The big railroads are changing their business model. What they want to do is hook up as many cars as they can and haul them as far away as they can before they stop again to unload any. It used to be there was a multitude of small customers serviced by railroads, but now the railroads want to find regional hubs in areas where a short-line railroad can gather freight, or take all of the freight that comes into the region, offload it and redistribute it, and coordinate that for local companies.

“We were fortuitous enough to be in a good position to grab hold of that business model.”

Freight Depot Operations Manager Matt Wiederholt said he has no official numbers, but being that he is responsible for the loading and unloading of freight at the depot, he has noticed that business has picked up during the last month or so.

“We do plan to add (as many as six) family-wage jobs in the future, but there is no way to say exactly when that’s going to happen,” Wiederholt said. “Because of the economy we’re being very cautious and trying not to over-extend ourselves.”

Indeed, industry experts say this is the best way for small, short-line railroads to stay competitive in the future.

A study by Hoovers, a business analysis company that offers proprietary business information through the internet, data feeds, wireless devices, and co-branding agreements with other online services, saying, “Large companies have advantages in account relationships and access to advanced logistics technologies. Small operations can compete effectively by serving a local market, specializing in cargo transfer, and facilitating the transport of unusual goods.”

The U.S. freight shipping services industry includes about 17,000 companies with combined annual revenue of $34 billion, but the industry is fragmented as the top 50 companies account for about 45 percent of revenue.

Demand is driven by domestic manufacturing output and levels of international trade. The industry is labor-intensive, with the average annual revenue per employee topping out at $170,000.

According to the railroad industry is poised to rebound in the years ahead as the cost of oil and gasoline continues to rise, undercutting the bottom line of shipping companies that are going to be taking long, hard look at old methods of doing business and trying to find new ways to keep more annual revenue, Keller said.

“Right now, it takes four truckloads to deliver the same amount of freight as it takes to load onto one railcar,” he said.

Currently, the Prineville Freight Depot primarily has lumber industry customers that ship products south along the Highway 97 corridor, north into Canada and all points east.

The Freight Depot originally was built in 2005 with the intention of bringing in new business for the City of Prineville Railway, which has struggled in recent years, especially in the 2007-2008 fiscal year when one long-time customer, Fontana Wood Products, delayed the relocation its operations from Redmond to Prineville, and another Louisiana Pacific, closed its doors in Burns altogether.

City officials also were betting on increased business from Les Schwab, but the sagging economy has delayed that realization.

A new FedEx hub being built in Troutdale, with 650 family-wage jobs, as well as the expanded freight rail capacity at the Port of Portland, promises to increase the potential for business; increased regional shipping capacity means more freight could find its way into the new Prineville Freight Depot, observers say.

UNIQUE FEATURES
One of the more unique features of the Prineville Freight Depot is that railcars can literally pull up on tracks running parallel to the building, and workers can drive forklifts right up to the cars and unload cargo without having to use a truck to move it from the end of the rail line to the storage facility.

The second freight depot, which is currently under construction and slated to open sometime next year, takes that concept a step further by running train tracks straight off the line and right through the center of the building.

“They are set up for drive-through traffic,” said Don Thompos of BBT Architects, who was the leader on construction of the existing freight depot.

“And the tracks are set up so when a  train pulls up it is four feet below floor level, so that puts the train and the building at the same level, making it very easy for workers to load and unload cargo. The other unique feature is that companies can actually store their containers inside the depot. There are not very many places that do that anywhere in the U.S.; most railroads have big yards and container storage facilities but not very many have the ability to warehouse material transfers all in one location. The place is big enough to put a football field in.”

Murray Cannon, superintendent of the project for HSW, said the building’s design allows for free movement inside.

“The 180-foot free span means there are no columns running from floor to ceiling that block their ability to move around on the internal slab,” Cannon said. “Forklift drivers can freely stack and store material in there without being interrupted by a huge column in the middle of the room.”