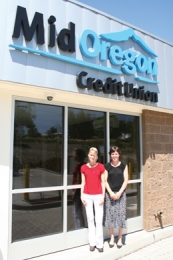 A Central Oregon community credit union is paving the way for customers to reap the benefits of easier access after unveiling its new Madras building.

Mid Oregon Federal Credit Union’s newest branch alongside Highway 97 on 395 SE Fifth Street, is the first credit union to be sited in Jefferson County and features a lofty street presence and distinctive design.

One of the most striking aspects of the new location is a bright, expansive sea of pavers forming the parking lot.

Mid Oregon VP of Marketing and Community Relations Kyle Frick said: “People see the parking lot and think it may be a somewhat extravagant expense, but the pavers actually proved to be a cost-effective way of dealing with water runoff for that location compared to the possible alternatives.
“We went through the planning process with the City of Madras and there was a water runoff issue to be mitigated in the design phase.

“We looked at a more engineered underground approach to deal with storm water, but we actually came to the permeable pavers, which allow water to drain through the parking lot, as a more economical, and greener, solution.

“In fact, during the recent heavy rains when other areas of downtown were flood-threatened, our parking lot filled but then drained within twenty minutes.”

Permeable pavers have recently found more favor as an environmentally-friendly method of handling storm water. They provide a solid ground surface, strong enough to take heavy loads, like large vehicles, while at the same time they allow water to filter through the breathable surface and reach the underlying soils.

The self-draining system utilizing the voids in the paving surface allows the rain water to soak back into the soils rather than transporting runoff and potential pollutants into our natural waterways.
Once ground was broken on the new site, locals watched in amazement as project contractors SunWest Builders had the entire project completed in less than 100 days.

Project manager Mark Maxwell said: “We got somewhat of a late start due to the permitting process, so we did the job as quick as we could and actually hit all our deadlines.

“We were grateful to work with everyone involved, from the client, to the architects and the relevant local government authorities who helped facilitate progress. The successful conclusion was really a testament to the planning and collaboration that went into this project.”

The project’s Principal Architect Joe Slack of Coos Bay-based HGE Inc. concurred that the permitting process was protracted, given that the credit union bought the property from the City and had to navigate through both redevelopment and Oregon Department of Transportation (ODOT) requirements.

He said: “Among other things, we had to get ODOT approval for driveway access and ran through several plans.

“There was a somewhat lengthy timeframe to get the necessary permitting taken care of, so I think SunWest felt they had to ‘get after it’ once we had the final approvals.”

The traditional-style wood frame building featuring white maple trim and stucco finish on the exterior and an open feel and much use of glass on the inside, has quite an imposing appearance from the street, and Slack explained: “Madras City Council has an overlay zone in that area, with stringent design criteria that we had to work through.

“Part of that design criteria in the central area is that buildings should be sited prominently, close to the property line and oriented to the street with parking to the rear and that there should be a minimum 25 foot wall height.

“One of the goals the city is trying to establish is to have people more out on the street; creating more pedestrian activity and more of a downtown feel.

“We achieved the required wall height through vaulting in the lobby and loan officer sections, but given the site grade and the wall height, this comes across as bigger than a single-story structure and creates the appropriate presence.

“We did look at historical buildings of the past for images as a reference point, including drawing on archways and somewhat of a monumental look.”

Slack said his company has substantial experience with credit unions, including design of Mid Oregon’s Prineville branch and needed to pick off the institutions ‘unique branding elements’ including the blue metal sloped roof and rounded column for the new branch.

He added: “It proved to be a great site in terms of visibility, and has the appropriate presence for the institution.”

Mid Oregon is the oldest financial institution to be headquartered in Central Oregon, operating here since 1957, and Frick said it had been working on a 10-year plan including discussion of where and when to open branches. Madras is its fifth location, joining others in Bend, Redmond and Prineville.
He said: “Because of the volume of members we have in Jefferson County – some 1,200 out of a total 17,900 – our board directed that we should have a branch in the vicinity to better serve our customers.

“Previously, our members in the county had to access services electronically; by mail, or by visiting branches in Bend or Redmond and the new branch goes directly to our service promise of being able to provide high levels of service.

“There is a significant population in the area and we can now serve a lot of people and businesses more effectively, giving potential new members more incentive to join.”

Frick also paid tribute to the cooperation and assistance of Jefferson County, the City of Madras and the local Chamber of Commerce in smoothing the project’s progress, commenting: “We felt very welcomed to be there.

“We really had a great experience with all involved – they worked hard to help us do what we needed to do and we were met with optimism ad positivity all round.”

The new branch will be headed by Team Leader Tammy Gregory, who says she is ‘delighted’ that she and her family have moved back to her hometown of Madras.

Among the features offered are online banking for people who do not have access to computers, safe deposit boxes, coin counting and drive-up and walk-up ATM’s.

Membership of Mid Oregon Federal Credit Union is open to anyone who lives, works, worships, or goes to school in Deschutes, Jefferson or Crook counties, or who is a family member of a Mid Oregon member.