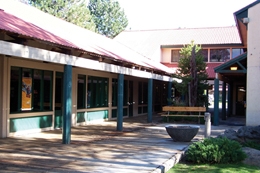 Hopes are high that new ownership will help restore Sunriver’s Village mall to its former glory as the economic, cultural and social epicenter of the community.

Rediscover Sunriver Village, LLC is set to outline further plans for revitalization of the dated mixed-use complex at an area Chamber of Commerce-sponsored Community Forum at the resort’s Great Hall this Friday, March 20.

The Salem-based group purchased the Village at Sunriver in a cash deal late last year (for reportedly less than half of the $26 million previous owners, Silverstar Destinations, LLC, paid) and has already outlined initial steps to “stop the bleeding” and refurbish some of the aging infrastructure seen among the deteriorating buildings and plazas.

On the short-term horizon, an 18-month window has been touted by Curry Architecture, which is part of the team tackling the regeneration project, to address pressing issues such as tearing down four buildings that are damaged or blocking views; creating entry ways and sprucing up grounds with new landscaping, lighting and restrooms.

Preliminary plans also include expanding the Country Store and relocating tenants to remodeled buildings echoing the design elements of the existing Bank of the Cascades building.

“We are going to keep a lot of the existing mall,” said RSV Managing Partner Cliff Curry in an address to the Sunriver Owners Association (SROA) Board. “The overall character the next 18 months will be similar in terms of roads and pathways.

“But we are going to totally restore it and change some of the visuals, heading towards the Bank of the Cascades design concept. We’ll also replace and repair electrical service.”
Curry commented that residential elements, previously the subject of controversy, would be considered two to four years down the road. “The economy is such a mess right now,” he said. “We really don’t know how things are going to settle down.

“Our approach here is to just stop the bleeding. There is a lot of value here and we want to stabilize that.

“During the next year we will be planning. We’ll focus a lot of energy on the Village at Sunriver.”
Local community groups like SROA have been encouraged by what they have heard so far, after a number of false starts with previous ownership entities who failed to deliver on transformation promises as empty storefronts proliferated.

“We are very pleased to see what’s going on already in terms of architectural energy and engagement,” said SROA Vice President Tom Ped. “The plans laid out for the next year and a half for items like safety and rejuvenation are encouraging.

“And it seems like the new owners are open to involving the community in discussions on how this core of Sunriver should be renewed.

“Obviously, they don’t have a concrete long-term vision as yet, but they are showing good early signs of credibility in terms of wanting to get the community involved and developing relationships with local merchants.”

One of the more notable moves suggested by RSV involves relocating the Village Bar and Grill to the north end of the mall, with a reshuffling of Sunriver Sports and Sunriver Music Festival within the complex.

Initial overtures to tenants have been enthusiastically embraced, with RSV aiming to create anchor points on both sides of the Village designed to attract more people into the facility.

“We will also make it more inviting by clean-up and maintenance,” added Rachel Rudiger, also of Curry Architecture.

“We’ll make archways, consistent signage and maps where people are entering. We have a landscaper studying problem areas and have had estimates on re-lighting.”

Other near term upgrades planned include updating restrooms to current code, and relocation of the entry closest to the Country Store to the middle of the mall. The short-term redevelopment plans are also set to be posted in storefront windows.

The 18-month master plan calls for inspection of every building; prioritizing repair needs and identifying safety hazards, as well as drainage and grounds areas needing improvement. The initial aim is to increase project “sparkle” with higher standards of cleanliness inside and out and consistency in hours of operation, signage, common area activity/music and window fronts.

Indications are that RSV will also coordinate an increase in the number and frequency of events held at the Village with everything from a monthly art walk, to a micro brew festival and farmer’s market suggested as additional regular attractions.

The Village was originally an integral part of founder John Gray’s vision of Sunriver as a self-contained community, says Citizens for Sunriver, an organization formed to help spur revitalization efforts.
From the beginning, the idea was for a mixed-use combination of retail, restaurant, commercial and residential units to serve as the business and social center of the entire community.

Originally, it was named the Country Mall, with the Country Store being one of the first retail businesses to set up shop. It also housed the post office, police department and SROA offices.
The mall grew into a vibrant retail hub, with a variety of shops and restaurants attracting throngs of customers. When Portland-based Weston Investment Co. bought the project in 1989 they renamed it the “Sunriver Village” and added four buildings, though relations with the owner later soured after plans for employee housing were rebuffed.

By the early 90s the Village began a slow decline as businesses quit and others curtailed operations. The post office relocated to the business park, while later in the decade SROA and the police department shifted offices to their current administrative building, which saw pedestrian traffic reduced further.

As businesses suffered, so did maintenance of the structures and common areas, with wooden boardwalks falling into disrepair.

Weston sold to Boise investment company DBSI in 2003 and anticipation grew that a new face at the helm could mean a turnaround for the Village in the face of vacancy hovering close to thirty percent.
Unfortunately, promised upgrades and marketing plans never materialized, and by December 2006, the Village had been sold again, this time to Silverstar.

Silverstar planned a dramatic new Village at Sunriver, featuring a comprehensive rebuild – complete with shops, restaurants, condominiums, a boutique hotel, plazas and walkways – in a Cascadian lodge-style of architecture to complement the resort’s forest setting.

Members of the community envisaged restoration of the Village as a fun, exciting place to visit and both SROA and CFS were supportive in helping Silverstar persuade County chiefs to approve a special zoning designation – Sunriver Town Center District – to spur development.

However, when the real estate and credit markets slumped in late 2007 and early 2008, Silverstar shelved construction plans and ended up defaulting on its loan.

Enter RSV, which has thus far demonstrated tangible commitment to renovation to the hub of Sunriver’s unique resort community and is putting a full-time manager on the ground.

The group’s backers are said to have ties to central Oregon and the extent of their immediate plans and long-term vision should become clearer in the near future.

“They are committed to enhancing the look, feel and draw of the Village and have ideas on what is needed to enhance this commercial core of Sunriver,” commented Ped.

“We are very supportive of the anticipated progress and would certainly like to see some long-term stability of ownership and execution of remodel plans.

“After all, we are all stakeholders in this community and this would do nothing but enhance the pride of ownership we’ve always felt here.”