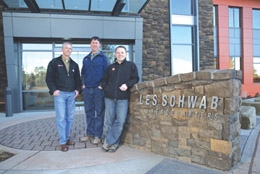 Very few successes are built on luck. Very few promotions are given by luck. They are earned…
Les Schwab

The year was 1952. A fellow by the name of Les Schwab purchased a small tire store in Prineville called O.K. Rubber Welders and the rest, shall we say, is history.

Today, Les Schwab Tire Centers employs 7,000 people in 420 retail locations throughout the Western United States, a profound testimonial to humble beginnings that originated 57 years ago.
In December 2006, Les Schwab Tire Centers announced plans to relocate its corporate headquarters from Prineville to Bend, moving some 300 administrative employees into its new, 120,000-square-foot facility located just north of Cooley Road in the city’s new Juniper Ridge development. Amenities at the new headquarters include an on-site exercise facility complete with locker rooms as well as walking trails, ample parking and a state-of-the-art food court, all surrounded by 300,000 square feet of native landscaping on the 12-acre site.

“This was one of the more aggressive projects ever built in Central Oregon from a schedule standpoint,” says Glenn Miller, operations manager for HSW Builders. “We broke ground in mid-September 2007 and worked through one of the toughest winters in the last 50 years, completing the job four days early with no time extensions. We pushed it very hard with a really good team, completing the work on time, which was a very important factor, considering Les Schwab allowed no variants in terms of when they intended to move into the building.”

According to Scott Maxwell, project manager for HSW Builders, the Les Schwab Headquarters building was a ‘fast track job,’ meaning that when the project began, plans were not complete, so the team worked on phases of documents as the job progressed. Miller says, “Because of the planning, it all went really well and we didn’t delay the occupancy of the building. At the peak, we were putting in 60-hour work weeks with a maximum of 160 people – up to 20 different subs at once, completing different tasks. We probably had about 700 people come through and work on this job at one point or another.”

The building has an attractive exterior skin, with different materials including precast concrete and a sandwiched-type metal panel system. This high-tech component, referred to as a composite metal panel, serves as a rain screen, protecting the exterior of the building from the elements. Sun screens provide shade for the windows, so in summer there is less heat buildup inside the building. Craig Stockbridge of GBD Architects was the principal architect on the project.

He says, “The Les Schwab Headquarters has been an outstanding project to be involved with in many ways.  We were fortunately matched with a very talented and committed team of design and building team.  In addition to standard program, schedule and budget goals, we designed a building that we think best matches the Les Schwab culture:

-Smart
-Efficient: Spatially as well as 25 percent more energy efficient than code
-Hardworking: Building is constantly working to minimize use or enhance the   space
-Friendly: Inviting and easy to understand and circulate through
-Durable: Long-lasting materials, i.e. concrete, glass, stone, metal panel
-Flexible: Building allows for expansion and could be sub divided
-Humble: Simple building forms and economical materials
-Local: Use of local labor and materials, such as local quarried stone,
wood veneer from Prineville, and recycled tire products used for tire
wheel stops and fitness flooring.
-Proud of its history: We integrated historical images, meaningful
artifacts and quotes from Les and displayed throughout the building.
Also each level and wing of the building is associated by images of a
certain era.

The building is composed of two different wings, connected by a knuckle. One wing houses a state-of-the-art data center. Training rooms, exercise and locker rooms and an employee cafeteria are all located in the other wing, and the Knuckle houses the main lobby and board room with a spacious deck on the top floor, complete with sweeping panoramic views of the Cascades.

HSW Builders was brought on board in April 2007, six months before construction started. “We broke ground on September 17, 2007,” says Miller. “Basically we set up a crushing operation on-site with a rock crusher, which was cost-effective and more sensitive to the environment as we didn’t have to run as many trucks back and forth past Sky View Middle School on Cooley. We basically stockpiled a tremendous amount of  materials on site that also could be used for sub-grades and other uses.”

According to Murray Cannon, superintendent with HSW Builders, the job was not without its challenges. “The hardest part about this accelerated schedule (an accelerated schedule is working six days a week with occasional Sundays) was working through the winter,” he says. “We were doing 60-foot, 12-inch walls in the middle of January when it was negative four degrees outside. It meant not using the weather as an excuse, figuring out contingency plans continually, so you’re building faster than you would if you just rolled along on a typical schedule. This project would never have been completed if it wasn’t managed well by the team we had on the site as well as constantly looking at the contingencies on how to get around the weather, with six-to eight-foot drifts of snow and occasional 70-mph winds.”

Charles Bahlman of Sheils Obletz Johnson and representative for Les Schwab concurred, saying, “In any complicated building project, being on time and on budget is a complete success, and Les Schwab was very fortunate to have assembled a terrific team in GBD Architects and HSW Builders. Les Schwab was a great asset to the team.”

As unique as the company’s heritage is the building itself, which emanates an elegant, yet accessible simplicity in design and feel. According to Miller, the Les Schwab Headquarters building is the first large project in Bend to incorporate the use of cellular or castellated beams, which compliment the open structure of the interior. The beams have large, circular holes cut into them, which attributes to their lighter weight and yet maintain their capability to carry the same load.

“The first benefit is saving on steel,” says Murray Cannon. “You can take a 12-inch beam and when the holes are cut by a laser, they open and stagger it and turn it into an 18-inch beam, so you get the same structure and support and save on steel, not to mention the look is very cool.”

He goes on to say that in most buildings, there is two to three feet of airspace above the ceiling to house HVAC equipment and electrical components. In the Les Schwab Headquarters building, where there is 100,000 square feet of access flooring, these same components, which also includes plumbing, are housed 18 inches below the floor. “This system gives you tremendous flexibility,” says Miller. “It allows people to move their cubicles around with ease by lifting up a specific section of carpet that reveals a panel that is easily removed, ensuring easy access to remove or replace anything that’s underneath. One of the biggest benefits to this type of access floor is that it is a duct – the entire floor is called an air plenum. You can put a small air grill in the floor and you get air to that specific location.”

A third unique factor is that all lights are on occupancy sensors, so they turn on when someone enters a room and go off when no motion is detected, saving on energy. Lights around the perimeter of the building are on a solar sensor and will dim or even turn off based on how much natural light is coming into the building, and at  night they will power back up and come on.

Other unique features of the building include a stunning “Heritage Wall” featuring a photograph and quotes of Les Schwab that graces the main lobby and the use of native sandlewood in an Ashlar pattern in select interior and exterior walls, quarried locally. The famous jeep Les Schwab used when he created his television commercials is etched in the frosted glass in the entry doors and the exercise room features free weights, yoga and pilates balls and comfortable athletic flooring that acts as a cushion when exercising. As an added benefit for employees, the building features a cardio room, locker rooms, showers and even a room specifically designed for bike storage.

Known for his devotion to family and employees, Les Schwab would be proud of the company’s continued efforts to uphold the standards he set in 1952. The legacy continues as we remember the words of a Central Oregon icon: “Let’s continue to do just what we have been doing. There will be no end to what we can accomplish.”