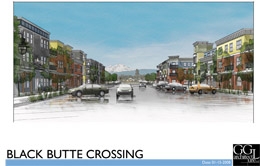 Commercial projects across the public and private spectrum are continuing throughout Central Oregon, albeit at a relatively slower pace, as the regional community works through the current real estate cycle.

Though most local contractors readily admit the proportion of governmental-related versus private sector work has risen, given the well-documented economic and lending environment contraction, there is still something of a steady beat to the regional design and building drum.
Feature projects in various communities include:

The project was designed by opsis architecture of Portland.

Boasting 100-plus parking spaces, it will also allow for more convenient customer registration, which may come as a welcome relief for those in the community who have experienced the periodic crush at Juniper Swim and Fitness Center or the downtown location that has served as the parks and rec administration base for the last 30 years.

An added bonus is a large community room and outdoor plaza that will be available to rent for events and meetings.

In keeping with one of the district’s core values, the district office building has been designed to incorporate many environmentally-friendly features, including a green “living” roof, radiant heated and cooled floors, and solar hot water.

Director of Recreation Services, Wayne Smith said: “The project should be on track for opening by the end of June this year, which is close to the original completion timetable.

“The late fall break in the weather helped significantly with construction progress.

“The facility is going to house all the district offices and has a huge community room which is going to be available for public use, in conjunction with Riverbend Park.”

Architect Scott Steele of Steele Associates said:  “This project will be built to Leadership in Energy and Environmental Design (LEED) Gold certification standards, including the first biomass boiler here locally.”

LEED is a “green” building rating system promoting sustainable building and development practices.
Steele also commented: “We have about 20 projects on the books right now, though as you may expect there is a relatively higher percentage of public projects compared to previous years.
“We have a full slate of work at the moment, and I am optimistic about future prospects.”

• Deschutes County Jail Expansion
Steele is also working on the envisaged $38 million Deschutes County jail expansion, which should be ready for bid documents and presentation for funding approval in early summer. County Commissioners will decide on how to proceed thereafter.

• Suterra
BBT Architects is working on plans for Suterra LLC’s planned new headquarters at Juniper Ridge in northeast Bend after the pest control products company signed a sale agreement for a site in the burgeoning mixed use development.

BBT Principal Ron Barber has indicated that his company has seen increased competition for Central Oregon business from architects from outside the area and, equally, his company has sought opportunities further a field in a market area throughout the Northwest.

• Hotel O
The Baney Corporation/Oxford Suites’ much-anticipated seven-story upscale Hotel O observed sprouting off Minnesota Avenue in downtown Bend is well on the way to completion, with announcements expected soon on when operations may be open for business.

The project will see additional production capacity with a phased program of additional 1200-barrel-capacity fermenter tanks.

Project Engineer Craig Mavis said: “We are working on preliminary engineering in accordance with our long-term master plan for growth.

“The first phase of the latest expansion will add four tanks to allow us to handle up to 300,000 barrels per year in relation to fermentation.”

Mavis added that he was working on the development parameters of the longer-term project, which could have the scope for up to ten fermentation tanks.

The tanks will likely be seen on additional building, going through the roof – much like beer sales seem to be doing.

SISTERS
• Black Butte Crossing
GGL Architecture partner Mike Gorman indicated his company is working on a number of projects inside and outside the area, including the Black Butte Crossing mixed-use development in Sisters.
Gorman indicated his company was also working on other multi-family concepts in Redmond and Eugene.
Gorman said: “There is obviously a more competitive climate for a lower volume of work locally. We are working on and pursuing projects inside and outside the state.
“It may be early days for economic recovery, but I am feeling a little more optimism in the air recently.”

PRINEVILLE
• Equestrian Clubhouse & Stall Barns
Prineville-area projects currently seeing progress include the equestrian center at Brasada Ranch, including a clubhouse, indoor arena and stall barns. Darrell Barnes Architects were involved in the design of the project.