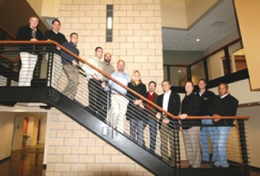 Five years ago Peter Regna, who hails from the east coast, bought Central Oregon based Aircraft Rubber/Fuel Safe Racing Cells.  The company designs, manufactures, and distributes a variety of high-tech puncture-proof bladders used in everything from NASCAR race cars for fuel, to water containment for NASA’s space shuttles and the International Space Station.

Their client list also includes military ,aeronautical and marine companies.  Committed to Central Oregon, Regna developed a long-term strategy to consolidate their operations and position the company to increase their market share through innovation and efficiency.  “We’re very enthusiastic and really like this area of the country,” explained Regna.

One of the biggest challenges Aircraft Rubber faced was that their operations were divided into two buildings, one in Redmond, which housed administrative offices and a machine shop, and a building in Bend where their main manufacturing has taken place.

Since both leases would expire in five years the company began developing a long-term strategy to consolidate their operations under one roof.

Regna noted, “It wasn’t easy to get everything to mesh.”  Unfazed by the impending challenges, they began the process with an extensive search for the right land.  After choosing a plot in north Redmond, owned by the city, they completed negotiations and construction began in the summer of 2007.

Today, the company’s commitment to Central Oregon has resulted in a custom, state-of-the-art facility that will allow consolidation of all operations under one roof.  The $6.4 million dollar, 92,000 square foot building, built by SunWest Builders, includes administrative offices, a high-tech research and development area and an enormous warehouse for manufacturing, storage and shipping and receiving.  The space also includes a high-tech solvent storage room designed for containment of flammable materials.  Safety was paramount in all aspects of the project.

The project’s Principle Architect, Scott Steele of  Steele Associates Architects, designed a building that was functional, efficient, sustainable and visually stimulating.  He explained, “It is a very energy-efficient building and many sustainable practices were implemented in the construction and design of both the exterior and interior.”

As you approach the building from the outside it is quickly evident that this is not your typical steel box warehouse.  In fact, it is not square at all, but L-shaped, with unique elements designed into the project like exposing the exterior structural tie rods and angling them rather then making them vertical.

Furthermore, in researching the project, Steele came across a standard item used in many of Aircraft Rubber/Fuel Safe’s products called a fill valve, which looks similar to an o-ring or metal gasket with multiple holes around the rim.  Steele realized he could fabricate enlarged versions of the rings and make them part of the exterior aesthetic.  The result is stunning.  Placed where the tie rods intersect, the rings give the building depth and create a visually inspiring effect.

“This is a very dynamic and striking building, which you can see from any direction, but a very cost-effective one as well,” explains Steele.

Upon entering the building through the main lobby, one is instantly struck with the artistic and modern design.  Steele Associates employee and project manager for the building’s construction, Jeff Welman, said, “We worked really hard on the lobby, it has a lot of geometry; in the early design phase it’s hard to understand how it’s going to turn out and there were some things done after the fact.  For example, during a meeting we were joking and said wouldn’t it be great if we had a NASCAR car in the lobby? Al (Albert Baris, CEO of Aircraft Rubber/Fuel Safe Racing Cells) looked at us with a straight face and said ‘we can get one,’ so we built a car platform.”

Today, an authentic NASCAR race car sits on the platform.  Along with the staircase, which “floats” around the elevator, and magnificent cracked glass reception desk, one can easily appreciate the time and effort that went into this phase of the project.  The ceiling opens up to the second floor and natural light pours in from the windows.  By having the building face north and west, there are stunning views of the Cascade Range and Smith Rock.

In fact, a key component of the entire building is the impressive use of many well-placed windows.  Welman explained, “There are times during the day when we can power down the lights and it is as bright inside, as outside.”  This holds true for the factory/warehouse side too and is an enormous factor in maintaining the overall efficiency of the building. Steele pointed out, “There is a three to 15 percent greater productivity whether you’re a student or a manufacturer worker, if you have access to daylight.”

Now that the building is completed, early and under budget, Aircraft Rubber/Fuel Safe Racing Cells will soon begin moving its operation into the new facility.  As they grow, they will be able to expand their operations as part of the master plan.  The south side of the building was built in such a way that an addition can be easily added.

With the company aggressively seeking new markets while staying on the cutting edge of technologies, Regna is acutely aware of the need for a modern, aesthetically pleasing and functional work environment for both employees, and prospective customers.

He explained, “The charisma of the building is a good morale booster for employees and executives; as we branch out into the marketplace we do have customers who want to come see our facility with bigger customers wanting to inspect our facilities. This building says we’re a proud and successful business, and actually speaks for us.”