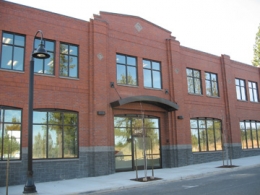 BRW Development, LLC is the brainchild of three entrepreneurial couples who happen to own the building in which the business is housed. After purchasing the land, strategically located near NorthWest Crossing on Bend’s west side, the site was developed in 2007 by Walker Structural Engineering, a mid-size structural engineering company with
five employees.
“We do anything from commercial building to homes to industrial buildings,” says Jon Walker, who co-owns Walker Structural Engineering with his wife, Heather. “When Jon Corbett came up with the idea, we jumped on it because it enabled us to work close to home and all six of us formed a great team, along with Gary Laursen, the architect who designed
the building.”
Other projects in Walker Structural Engineering’s portfolio include the Valiant Building across the street in NorthWest Crossing, the La Pine High School addition and the new Redmond City Hall. Walker adds, “The company is also responsible for developing the new Bond and Bluff building in the Old Mill district, along with three buildings on 14th and Knoll and some private residences.”
According to Walker, the company primarily serves architects and designers and is mostly referral-based. Currently, they are in the process of obtaining building licenses in Idaho and Washington to broaden the scope in addition to focusing on Central Oregon.
Jon Corbett and his wife are owners of Audio Image, also housed in the same building under the umbrella of BRW Development, LLC.
Founded in 1995, the audio video company caters mostly to residential and employs three employees. “We’re different from our competition in that we always have an owner on the job, which is a bonus not only for us but for the client as well,” says Corbett. “We’re small enough that there is someone who always cares about the quality of workmanship on every job and my partner and I share the responsibilities of being in the field and in the office.”
He goes on to say that despite the current economic downturn, the company is busy with custom work and is strengthened by a good network of builders and a service-oriented work ethic. “BRW Development was founded by three couples who wanted to develop land and see where it went from there,” says Corbett. “We wanted to build this building on this site. When we first had the vision, the economy was doing very well and now, when the building was completed, the economy was hardest hit, presenting the added challenge of scarce leasings. Even though the economy was better at the time of construction, we took a conservative approach by building just one building at a time – this is the smaller of the two. It’s a great area for us to be in because we’re in the middle of all the upper-end home development that’s happening in the NorthWest Crossing community, as well as other communities like Broken Top, Tetherow, Awbrey Butte and the Highlands.”
As a viable alternative to long-term leases, Heather Walker says, “The idea behind the office concept is that there are lots of people who want to work outside the home and get into something that is not only different but cost-effective. When we were planning the building, office suites were the trendy thing but there weren’t a lot of new ones that were available. When we were researching available office space, most of the possibilities were between 3 and 4,000 square feet and we were looking for smaller space in the 13-1800 square foot range.”
Jon Walker elaborates by reiterating a few marketing strategies in hard economic times that are available to potential tenants of the building. “Even though you may have downsized from an office space with five employees to one or two, amenities like a large conference room, full-service Internet access, a color copy machine with no lease, fax and shared kitchen are available with all our office spaces,” he says.
“One inclusive bill takes care of the heat and power and many people are using their cell phones in lieu of land lines, so basically their expenses entail setting up a desk and purchasing a computer. In addition, we’ve decided to offer month-to-month rents as opposed to long-term leases so businesses have a nice working base without committing to a lease. We get the rents and they get more flexibility, so everyone wins.”
According to Walker, the first vision for the exterior façade of the building was Tuscan, but the team switched to an Old Chicago style with a timeless feel, designed by Gary Laursen, owner of Studio g, architecture, LLC, also housed in the building. “It’s a commercial style from the 1890s-1920s,” he says. “In addition to brick, other materials include split and ground face block, resulting in a nice historical style with a nostalgic feel – yet sporting an interior with all the amenities of present day. An added bonus is NorthWest Crossing was great about the overall design of the building, so everybody comes out on top.”
Information: 541/480-2901
BRW Development, LLC
2863 NW Crossing Drive, Suite 201
Bend, Oregon 97701