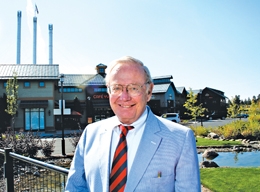 Who among us can say we had such a grandiose vision that would completely change the face of our city? A transformation that would create one of the most distinctive and dynamic mixed-use developments in the Northwest? Bill Smith can boast that, if he were a boastful kinda guy. Instead he comes across as a matter-of-fact, tell-it-like-it-is developer who saw an opportunity, seized the moment with great gusto and proceeded to instigate his revelation.

Smith, president of William Smith Properties and the creator of the Old Mill District, tells the story of working for the Brooks Scanlon Mill in the 1970s, giving voice to his relationship to the 270 acres along the Deschutes River that once housed one of the largest sawmill operations in the world.

The Old Mill District is on the same property where Brooks-Scanlon operated its plant.
During its days as a lumber mill site, workers and families moved to Bend from all across the United States to take part in the Oregon lumber industry.

Today, the site is home to dozens of retail stores, restaurants, commercial institutions and a multi-plex movie theater showing the latest Hollywood movies.

The intriguing history of the site, along with majestic mountain views, the panoramic riverfront views and the stately smoke stacks preserved from the lumber mill days add an immense allure to the area. How did all of this happen over the past 15 years?

Smith said he and his investors (River Bend ltd. Partnership) purchased the site on September 8, 1993 at 1:30pm. He then set about to execute what he thought should be developed there.

“If you have ever visited the riverwalk at San Antonio you will see something very similar to what I wanted to create in Bend,” explained Smith.  The creator of San Antonio’s attractive riverwalk is Jim Cullums, who Smith met with to tap his creative views. Cullums told Smith that a large part of the concept for the riverwalk came from his father, who once played jazz on the grassy slopes of the river on Sunday afternoons.

“He told me that the river space rented for $2 a foot, but away from the river it went for just 50 cents,” said Smith. “We knew that if we could capture the river, we could make money.”
Smith hired KenKay Associates, a San Francisco firm that has completed dozens of projects within multi-phased efforts, often realizing its own master plans through design guidelines and landscape architecture.

“KenKay developed a land plan and outline, how it would all work and set the tone for the project. KenKay was a key player in the design of the district.  The basic premise has stayed the same since its inception, like connecting the north part of Bend to the site and building a bridge over the river,” Smith said.

The plan included salvaging as much as possible of the original mill buildings, and several historic buildings have been renovated to provide unique retail space for the center.

“The amphitheatre was moved to the other side of the river so it could align better with the sun (it originally was to be created where Lifewise sits today). We also wanted to begin with the retail phase, but it took too long to get the permits so we started at the top…..where iSky is today.”
The Les Schwab Amphitheatre has become a much-loved venue for the region’s music lovers. However, Smith voiced concerns about the future of the music industry, noting that people don’t buy CDs any longer; instead, they often buy just one song at a time. “And while we once could fill the house with big-name acts such as Jack Johnson, who has been here twice, he will now only play to a setting that holds at least 20,000 people,” Smith added.

Smith said now they are combining acts and being creative about the space. He pointed to the recent homerun of the Art in the High Desert festival, which was held along the riverfront.
Smith reported that there wasn’t a movie theater in the original plan.

“One day we all of a sudden had a lot of interest, so we worked with Regal to develop the movie theaters because Regal is the best exhibitor in the world.”

That first phase of the retail development included the shops surrounding The Gap, Banana Republic and eventually Victoria’s Secret. Just a few years ago the brick buildings were refurbished where REI resides and Saxon’s Fine Jewelers and the Martini Bar keep everything hopping.

“For us, being here at the Old Mill is like a breath of fresh air,” says Natasha Henderson, daughter of Annette and Ron Henderson, who own Saxon’s along with partner Bruce Plummer. “The area encompasses all age groups and economies and there’s always something for everyone, whether you like to be entertained, listen to music, discover the walking paths, kayak or shop. You can do it all right here.”

Annette Henderson adds, “The best part of the Old Mill is the concept of community. It’s rejuvenated us all.”

Saxon’s resides in what was once the old Fuel Building, which housed the fuel for the powerhouse when the area was used as a mill. Henderson purchased the building in 2004 and transformed the first floor into a full-scale jewelry store that specializes in colored stones and diamonds. “We travel to Thailand and Sri Lanka for our rubies and sapphires, overseas for our pearls and Africa for diamonds,” said Annette Henderson. “The atmosphere is always exciting and busy. It’s a happening spot and we love it.”

Phase Two has just recently been completed, where Allyson’s Kitchen, Pastini Pasteria, Flatbread Community Oven and Orvis appear to be doing a good business, even during a looming economy.
“The overall vision took a little longer than I thought,” said Smith. “Fortunately over the years we have had a good economy and I think things will stay pretty much the same. We still have some land down there to develop……three acres at the north end, but we don’t have any plans for that right now.”

For lovers of hand-crafted pasta, check out the 36 different varieties on Pastini Pastaria’s menu, along with a plethora of other offerings such as salads, paninis and sandwiches. Co-owner Susie Bashel says, “For a short while, we wavered between two locations – downtown and the Old Mill. In the end, we decided to go for that great view of the Cascades, and coupled with the fact the Old Mill is a destination for locals and visitors alike, it’s a win-win situation.”

Right next door is Flatbread Community Oven, where all ingredients are fresh and prepared daily with care. With a specialty of true Neapolitan pizzas, central to the theme is a 900-degree wood-fired “community” oven.

Owner Robert Lumsden shares his thoughts on why the Old Mill was first choice for his enterprise: “The most important one is that our business model is loosely based on placing restaurants in towns we want to hang out in. That aside, as a young upstart restaurant company, Bill Smith gave us a rare opportunity as most national lifestyle centers tend to steer their tenant selections towards more common and established concepts.

“He had faith in our extensive restaurant backgrounds and saw it as an opportunity to position our brand alongside respected national retailers to see how well it paired with them, while at the same time rubbing shoulders with locals such as Vanilla Urban Threads and regional players such as Pastini Pasteria. After looking at several locations, we felt the Old Mill, particularly for the price per square foot, was the best place to be.”

Tom Keeton, project manager for Keeton-King Construction, Inc., shares his enthusiasm regarding the ongoing energy at the Old Mill, citing the story of the 400-square-foot historic building built in 1912 that houses DeWilde Art Glass.

“We remodeled the building after it was a bike shop,” he says. “Shortly thereafter, Rich DeWilde moved in with his stained glass business. Eventually, the actual building was moved from the hot pond across from Saxon’s to its current location near Coldwater Creek and the Regal Cinemas.”

DeWilde has been building stained glass windows for 30 years in Bend and couldn’t be happier in his unique location at the Old Mill. “It’s a great place,” he says. “They’ve done an amazing job here at the Old Mill – it’s like a community within itself and everyone gets along really well. The river is only 100 feet away. I can’t say enough about it.”

While KenKey was the key to the conceptual design of the Old Mill, Smith noted that he has retained other architects for various pieces of the development, including Ankrom Moisan, Neal Huston, Joseph DeCredico, Field-Paoli, WPH Architecture, Benson & Bowles, Group MacKenzie, Mithun and CIDA. All land planning and some architecture was by KenKay & Associates. Landscape architecture was Carol Mayer Reid, KenKay and Group MacKenzie.

Engineers have been Bussard Engineering — Jim Bussard and Craig Horrell.

Smith said: “Keeton-King built all of it except Greg’s Grill. I have used Keeton-King on projects since 1970. Arland Keeton has been on time and on budget for all of the Old Mill work. Couldn’t be better. We’ve worked together so long we finish each other’s sentences.”
Recent Architecture

In June 2006, Keeton-King Construction began work on four new buildings at the north end of the Old Mill district, three built on spec and one constructed with interest from current tenant Orvis, an outdoors-themed store specializing in fly fishing gear.

Group McKenzie, based in Portland, was brought on by Smith, who wanted to go in a bit of a different design direction for Buildings A, B, C and D than what had been created in the first phase of the project.

Group McKenzie has been in business since 1960. The multi-disciplined firm offers services ranging from architecture, engineering, land-use planning, transportation, civil engineering and interior design.
“When we met with Bill, his idea was to make these buildings truly reflective of the Old Mill,” says Terry Krause, principal of retail architecture at Group McKenzie. “Our endeavor was not just to use pieces of the Old Mill but have the buildings actually resemble those in the original Old Mill, although used in different ways.”

According to Krause, Buildings A, B and C were modeled after historic buildings with regard to shape, roof lines, cupolas and what appears to be second-story windows.

“We played off the character of those buildings while going deeper into the materials used in their construction,” says Krause. “Examples would be thicker board cedar siding and details like window trim, similar to that which would have been in the original buildings. All aspects were highlighted and executed in a modern way that still pays respect to the past. We added some brick aspects to dress the building up a bit, bringing them to a high-enough level that would be fitting for occupancy by the caliber of tenants who are there. The buildings reflect their persona.”

Krause goes on to explain that although the Orvis building was also designed to blend in with the other structures at the Old Mill, it has its own unique flavor which takes its cue from Orvis’ history and philosophies.

“The building resembles a lodge-like structure,” says Krause. “We wanted to tie it into the Old Mill but with an outdoor feel. The same type of materials were used but were left more natural and were not stained, along with the addition of a large front porch.”