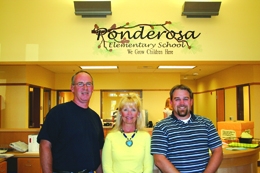 Whenever a major construction project is completed on time it is very commendable. When the project finishes two months before it normally would, it is tremendous.  This was the case for the newly opened Ponderosa Elementary School located on the corner of Yeoman Road and Northeast Purcell Boulevard.

Robinson Construction Company began building the school from scratch for the Bend-La Pine School District in October 2007.  Normally a project of this size (65,000 square feet) would take a minimum of twelve months, but Robinson was able to keep a very tight schedule and the doors opened on time for the 2008 school year.

According to Ponderosa Principle Teresa Hjeresen, “They just did an outstanding job; I can’t say enough about the fantastic job they did.”  In celebration of their monumental achievement, Robinson Construction threw a BBQ at the ribbon cutting for the entire Ponderosa family, which included 450 family members, students, staff and the crew.

For Robinson Construction Project Manager Toby Thosath the biggest challenge was, “the schedule and the weather, and even though weather wasn’t too bad this winter,  trying to pour concrete in December is tough, but obviously the objective was to get it up and running by school starting (September 1) and we made it.”

He added, “It went really smooth for the time crunch that we had.”  From a design perspective, Project Architect Maureen McClelland, with BBT Architects, explains, “Our biggest challenge was taking the existing prototype and making it unique and appropriate to the site.”

Although the Bend-La Pine School District has used the same proto-typical elementary school model for the last six projects, aspects of Ponderosa have set a new standard.  According to Paul H.

Eggleston director of facilities for the Bend-La Pine School District, “the clear story windows (highest up), the windows above the classroom doors, and all the classroom windows are all operable.”

This means that the school is designed to take advantage of natural cross ventilation throughout the building.  This design type limited the need for air conditioning units to the core of the school, which includes the main office and media rooms.

“The cross ventilation is so much healthier for the children,” observed Principle Hjeresen.  With environmentally friendly building materials and automatic shut-offs for lights and water, this project takes full advantage of green building.  In turn, this makes it not only healthier for the children and staff but economically sound for the tax payers.  Eggleston noted, “For our next two projects this will be the new template, and all exterior windows will be operable.”

The initial plans for the project were designed with only two main classroom wings, but it was quickly realized that it would be more cost effective to build the planned expansion, set to begin in five years, now rather then later.

Thosath explained, “We wanted to do it now while the prices were good, as opposed to five years from now when it would cost twice as much.”

The ability to increase the scope of the original plan and keep it within the budget and on time is a testament to all those involved.  According to McClelland, “we had a great project team (owner, contractor and architect) and open communication, which made for a successful experience during construction.”

At the peak of the venture Robinson had up to 125 people working, which helps exemplify their commitment to the project, the district and the community.

The final design of the school was made to accommodate up to 600 children.  Currently there are 469 students occupying the 24 classrooms.  As the area population grows, the school is already well equipped to handle new students.  At capacity, classrooms will have a maximum of 25 students per room, which is a reasonable number for maintaining an environment conducive to learning.

Other aspects of the school that help the overall environment are the interior design and exterior landscaping.  Hjeresen explained part of the design upgrades included a “very open and welcoming entryway and front office, and the colors of the school are happy and radiate warmth.”  She is also particularly happy with the landscaping Robinson completed.  “They built wonderful green spaces,” she said.

Another unique aspect to the overall project is what the future holds.  The school is adjacent to U.S. Forest Service land, which is being converted into a park and sports fields.  “There will be two little league fields when the park gets done, there is going to be a little sports complex over there,” noted Thosath.  Although not directly a part of the school project, the fields will be an added benefit not only for the students, but for the community in general.

The school, named Ponderosa for the former ponderosa pine nursery located there, is an example of the entire community coming together and producing a necessary entity in a cost-effective manner, and doing it the right way.

Thosath reflected, “It’s a good project and good for the community to see tax dollars at work and being spent right, and they are really getting some bang for their buck.”   This is yet another success story for the Bend-La Pine School District.  “What we see standing there is a testament of the district to provide the best structures for our students and this was a culmination of an effort from the design group, to the general contractor, and the district,” reflected Eggleston.