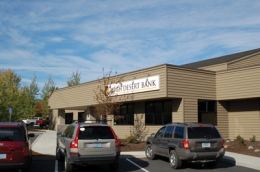 For the first time in 31 years a new, locally owned bank has opened in Bend.

High Desert Bank, located at 1000 Disk Drive, opened September 26 in the Deschutes Ridge Business Park with a commitment to serve small and medium businesses and professionals. While the bank will carry every type of depository product, such as personal checking, business checking, money market and CDs, CEO Larry Snyder said their main focus will be commercial lending and giving businesses the personalized service they crave.

“So many people go in their bank and say, ‘I walk in and I don’t know anybody in there and nobody knows me,’” Snyder said. “Well, I’ve got nine employees, so somebody is going to know you when you walk in. I don’t have an 800 number. I have 40 phone numbers, so everybody in this building will have a direct phone line. When you call, a human will pick up the phone unless it’s after hours.”

In addition, the teller counter is constructed so that both customers and bankers can be seated during transactions and all offices are located on the ground floor for easy access to bank executives and loan officers.

“That way only having one location is never an inconvenience to my customers,” said Snyder, who never plans to branch out – a way of keeping the bank small and personal.

Snyder said the idea to start High Desert Bank came about during a discussion with friends nearly a year and a half ago.

“We just started talking about whether or not a community bank would fit in this town,” he said. “We’ve got 14 banks and only one is based in Bend … and we wanted a bank that’s based here, has a local board of directors and has local investors. Every employee here is hired from Bend.”

The first step to starting the bank was putting together a board of directors and Snyder said the people he approached about taking a position were enthusiastic. Making up the board are Gary Fish of Deschutes Brewery, Tim Van Horn of Norwalk Furniture, John Lietz of Arrowood Development, Romy Mortensen of Brooks Resources, Cynthia Kane of Clear Choice Health Plans, Gwil Evans of Professional Air, Dr. Bruce McLellan of Heart Center Cardiology and Snyder himself.

The next step was finding a building to lease and then filing an application with regulators in order to obtain a permit to fun the bank.

“They go through the process and do an FBI background search on all the directors, including myself,” Snyder said. “Then we fill out the application, which is about five inches thick, and the application has information on every board member. You also need to have the demographics of the area because you need to convince the regulators that a bank will work in this market.”

Snyder said he and the rest of the board then set out to raise capital and ultimately raised $8 million through selling stock to 120 investors.

“That’s the money we will initially utilize to loan out,” he said. “… The way the bank is regulated you can only loan out a portion of your capital and it’s 15 percent. So if I’ve got $8 million in capital the most I can lend to one person is $1.2 million. I have set up relationships with participating banks, so if someone needs to borrow $3 million, I’ll make him the loan, hold $1.2 million on my books and participate the other $1.8 million with other banks.”

Snyder has been in the banking business for 31 years and in three states. Originally from Colorado, he lived in Alaska for 21 years and Arizona before moving to Bend seven years ago. He was employed as business banking team leader for Sterling Savings for six years before starting High Desert Bank.

A grand opening celebration will be held in October with an exact date still to be set.