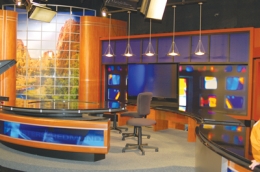 Yet another sign that the high desert is evolving into a higher level of technology has never been more evident than at the unveiling of the KOHD Studio in Bend.

The region’s largest television studio and one of the nation’s first ‘ground up’ high definition video production facilities, has arrived as Chambers Communications’ fourth ABC-affiliate in Oregon, and not a moment too soon.

Thankfully, now competing head-to-head with the area’s only other broadcasting facilities, KOHD raises the bar in broadcast news production with a $13 million investment that should pay dividends.

The station’s first news broadcast was launched at 5am on September 26, with nary a glitch, following two weeks of dress rehearsals, four times daily, under station manger Jerry Upham and news director Nic Moye, who were hired a year before the station hit the airwaves.

Chambers Communications, headquartered in Eugene and the parent company of an impressive stable of ABC affiliates, invested $8.4 million in Federal Communications Commission licensing fees, another $2.5 million to construct the energy-efficient studio and $3 million in the latest high definition equipment. But it is the station’s planned interaction with viewers that has Upham and Moyer most excited.

“People nowadays have so many options in which they can receive the news, and it seems viewers want to share opinions and even have some control in the programming,” Upham said.

So, to the extent, Moye, a veteran newscaster in the Colorado, Seattle, Portland, San Francisco and most recently, San Luis Obispo, California, markets, has developed a viewer contribution and input system that compliments the station’s wireless microphones, robotically controlled cameras and 81-inch monitor that serves as the backdrop for news broadcasts.

“We have the ability to reach out to the viewer in newscasts and they can post comments on stories at the station’s website,” she said. “What’s more, when we host live guests, viewers can e-mail questions; or even suggest the guests that we book.

“People, in general, are more vocal, and we want to deliver features that not only give them the who, what, where and when, but also the why, so that they learn something from every story aired.”

There’s also plenty to be learned for the average viewer on just how the news is delivered in today’s modern world.

Wireless microphones have now been complimented with a wireless communication system that the floor director utilizes in choosing camera angles, tape lead-ins and fade-outs or even breakaways to commercial spots.

The router, or a built-in rendering system, insures flexibility that allows any broadcast to remain on the air no matter what technical difficulties the station may encounter.

Cameras are manually placed on the floor and robotically positioned with the floor manager calling the shots, overseeing three cameras at one time.

There is no longer an editing room in the main news room since tape-less cameras that utilize a disk are the fashion for the 12-15 HD cameras that the staff at KOHD man. A disk is placed in a laptop and edited and the procedure could be done at a WiFi station at a local Starbucks.

Moye oversees a staff of 13 on-air personalities and a dozen more behind-the-scenes production crew and assistants, all trained to bring the news to viewers in the bright, vibrant colors of high definition.

Even the weather reports have changed here with meteorologist Adam Clark presenting the SWI weather service and graphics in 3-D.

The main set, designed by Express Group of San Diego, blends the high tech with a distinct Central Oregon feel that includes a large mural of Smith Rock contrasted with the 81-inch monitor backdrop plus black desk tops with chrome panels.

The lighting, designed by Redwood Media, offers clear, recessed lighting and tracks that hold true to a modern image.

KOHD offers news service from 5-7am daily plus 30-minute reports at 5pm, 6pm, 6:30 and 11pm weeknights. Upham said the station has blended a good combination of veteran newscasters such as anchor Jim Brinson with young talent consistent with a small market and promises the chemistry will develop over time.

“From day one, the Chambers family wanted to do this (launch the station) right with the building, high definition equipment and talent on board,” he said. “We were all a little nervous with new people and new software, but in the end, the quality will show every day that we’re on the air.”