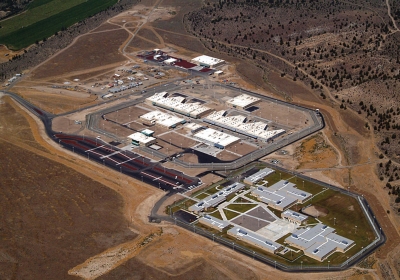 As the first wave of inmates arrive at Deer Ridge Correctional Facility in Madras, it’s interesting to examine the scope and complexity of the ambitious $190-million project.
Simply put, the sprawling facility is a city within a city. The 453-acre site, located five miles east of downtown Madras on Ashwood Road, has virtually every amenity and the infrastructure of fully functional community including:
• Housing for 1,884 inmates or 644 beds in the all-wood structure minimum security facility that also includes a multi-purpose building for seminars, recreation, educational facilities, classrooms, counseling and chapel services plus 1,240 beds in the five-pod medium security facility.
• Medical services ranging from exam rooms, dental unit and mental health treatment facilities plus outsourcing to nearby Mountain View Hospital for off-site emergency services.
• Full commercial kitchen complete with dining hall where inmates will bake bread, rolls and prepare food for three daily meals.
• Warehouse and storage, light manufacturing, vehicle maintenance and landscape maintenance for the grounds surrounded by a 12-foot fence topped with razor wire all under the watchful eyes of security personnel perched in the three-level gatehouse.
• Three megawatts delivered that are enough to power 450 homes plus water services equivalent to the water needed for 757 single-family homes.
“It is basically be a city within a city with medical and dental services, kitchen and food preparation, drug and alcohol counseling and a non-denomination church serving 24 different religions,” said Parrish Van Wert, community development coordinator.
About 108 inmates will arrive within the next few weeks with 34 to 36 coming weekly following a complete evaluation at the state’s intake center in Wilsonville. Another 212 drug, alcohol and mental health services inmates are expected in November.
The 173,000-square foot minimum security prison was completed this summer and on-site training began for administration, security and support personnel in July. The 380,000-square foot medium security prison will open for the first wave of inmates in about five months
DLR Group Architecture and Planning Group in Seattle designed the all-wood minimum security prison that more resembles a middle school campus than a prison. The project was ably constructed by Kirby Nagelhout Construction of Bend.
Once full completed, Deer Ridge Correctional Facility will become the third-largest correction facility in the state when it reaches capacity in six or seven years.
“It will be equivalent to the 164th largest city in the state,” Van Wert said. “The two facilities will employ 400 to 500 employees at family wages with full benefits creating an annual payroll of $22 million.
“The $22 million will have an impact on every economic sector in this town from housing development to retail stores to restaurants and banks. The prison has essentially created recession-proof employment with full medical, dental and optical benefits.”
While the only requirement of inmates in the Oregon Department of Corrections system is that earn their GED while incarcerated, many will continue their education by taking on-line courses through the prison’s intranet system where COCC and OSU courses are offered.
All inmates are also required to work with most preparing food, cooking, providing janitorial services, laundry services or landscape maintenance. Some will also work on crews at nearby parks and highways.
“Since we are starting with only a handful of inmates, most of them are going to be the institution workers, but we are working with the City of Madras on work programs,” Van Wert said. “As we receive inmates that qualify to work away from the facilities, we will add programs with the Oregon Parks Department, BLM/Grasslands, ODOT, U.S. Forestry Department and the like.”
There are currently 137 employees on the site with Van Wert estimating that 34 percent were local hires and the balance from other institutions. Officials are in the process of hiring another 100 employees with a start date in November or January. Employees will peak at 400 to 500 workers.
The ambitious project, one of the costliest in the history of Central Oregon, stalled for two years after the property was purchased for $401,000 in 2000. The state legislature initially authorized $57 million to begin construction during the 1999-2001 biennium, but it was put on hold by state officials in 2002.
The legislature authorized $5.5 million to restart the project in August 2004 and site work began in May 2005. Water, telecommunication, power and natural gas were installed along with sewer and storm drains.
A $5 million project to improve and upgrade Ashwood Road that connects downtown Madras to the prison site along with a new sewer line was added.
The campus-style prison jump starts a wave of residential construction within the city with 15 new subdivisions either under construction or in the final phases of planning review according to city administrator Mike Morgan with an estimated 4,000 new homes coming onboard in the next 15 to 20 years.
While Van Wert, the former Madras Chamber of Commerce director, won’t go as far to say that the prison directly impacted the city’s future growth, he believes Deer Ridge Correctional Facility paved the way for prosperity.
“What the prison did was to get city and county officials to start thinking about long-range planning for this community,” he said. “Things like schools, the hospital, sewage treatment and roads. In reality, the prison allowed everyone in this community to brace for growth.”