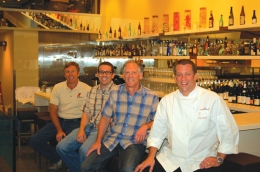 Restaurant entrepreneur and Executive Chef Jody Denton said one of the most difficult challenges that he faces when opening a new restaurant is simply coming up with a name for the new establishment that will capture the mood of the eatery, and more importantly, plenty of customers.

“I always seem to agonize for months over the name,” he said. “Fortunately, my wife Michelle will go on-line and look at restaurants around the world and come up with some ideas. She found a restaurant that we both love in France when we opened Merenda.

“For this restaurant, she found names like ‘Deep Blue’ and ‘Deep Blue Sea’ but we didn’t really like the sound of them. Finally, Michelle said, ‘Why don’t you just call it, ‘Deep?’ We both really liked the feel and sound, and it just stuck.”

It is an appropriate name for Denton’s newest venture on Wall Street just south of the Tower Theatre in downtown Bend where he’s unveiling a modern Japanese restaurant that has been in the planning stages for nearly two years.

The 3,158 square foot, two-level restaurant has a deep menu ranging from Kobe Beef Tatake to stir-fried Edamame to shrimp tempura and a profound ambience thanks to the creativity of architect Cass Calder Smith of San Francisco with seating for 111 on the main and mezzanine levels.

There’s also a full-service bar with Denton’s trademark varieties of fine wines, Japanese brews and 40 varieties of Sake by the glass and an extensive sushi bar unparalleled in Central Oregon.

D.E. Rink Construction was the general contractor for the project and did a tremendous job of crafting the new eatery in a narrow, 25-foot wide space that was once part of Sagebrush Furniture in downtown Bend.

Denton’s vision called for modern design, natural elements of wood, stone and glass and a south wall that includes images of trees, logs and the natural environment of the woods with three large prints centered to create a strong lumber theme.

The focal point of the restaurant is an overhead water canopy that continuously streams water through an elaborate pump system on a plexi-glass bed while white lights illuminate the feature, sending light dancing throughout the restaurant.

“The lighting looks like a swimming pool on a summer day with the light dancing off the water,” Denton said. “It’s guaranteed to create a buzz in this town. Once people come and eat at Deep, I’m hoping to hear them say, ‘I can’t believe this restaurant is in Bend.’”

The setting is certainly energetic, modern and lively with a strong emphasis on a Brazilian walnut known as epa. Epa grows in marshes and riverbanks in South America and has a reddish-brown appearance with a greenish tinge that serves to lighten up the new establishment.

Project manager Rick Stilson said that nearly 3,000 pieces of porcelain in 2 by 24 inch sheets were hand laid on the floor and tile accents behind the bar were laid after the wall was notched and studs cut back for a perfect inlay.

The narrowness of the building created the biggest challenges for Stilson and his crew of subcontractors. They had to create three different cooling dispensers in the kitchen and the exposed heating the cooling ducts in the main dining area are exposed, actually becoming part of the modern deco look.

Denton has assembled a staff of 35 that will include six line cooks and four sushi chefs. He personally hired the sushi chefs after spending a week at a sushi culinary class in Los Angeles and hinted that he will periodically work at the sushi bar when he isn’t too busy operating the two restaurants.

Denton has a long history at successful restaurants on the West Coast but made the decision to settle in Bend after working at the 1995 Sagebrush Classic at Broken Top.

“I kept coming back to cook at the event and really liked the people that I met every year,” he said. “Finally, my wife and I decided to move here.”

Denton also has a long relationship with noted restaurant architect Cass Calder Smith who started designing eateries in the Bay Area and has now expanded with an office in New York.

“He understands both restaurant architecture and fine art and has a great eye for combining the two elements,” Denton said. ”I knew him when he first started in the business, and now he’s lecturing classes at Cal. We were very fortunate to have him on this project.”

Denton said he will offer a “very substantial non-sushi menu” plus a 30-plate display at the sushi bar with 28 different items and that the cocktail bar will have a “more creative menu” than Merenda with a very focused wine list.

“I changed the plans a lot over the past two years, but the delays allowed me time to think things out about the concept and the finished product,” he said. “My initial fear when I opened Merenda was that I was creating something too sophisticated for Bend. I was pleasantly surprised how Merenda was received and accepted in this town, and I’m hoping for the same reception with Deep.”

Given the atmosphere, extensive sushi menu and Denton’s reputation for superior cuisine and excellent service, it’s a good bet that Deep will be creating a buzz this summer. In addition, D.E. Rink Project Manager Rick Stilson appreciates the unique project.