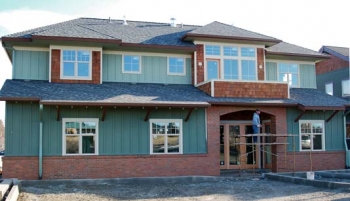 If the new law offices of attorneys Phil Garrow and Kevin McCarty in the Portwood Building centered along Allen Road in the Shevlin Riverfront Plaza appears to look more like a custom home than many of the neighboring businesses, it’s with good reason. General contractor Mike Dasen of Spring River Builders has built hundreds of custom homes primarily in Sunriver Resort since starting his business in 1978 and he’s borrowed many of his custom touches to enhance the 3,800 square foot building that was designed by GGL Architecture.

For openers, there’s the building’s great curbside appeal with a mixture of masonry brick and columns combined with ample windows that capitalize on the views of Pilot Butte and the Deschutes River to the east and Mt. Bachelor to the west. There’s also a pair of second-level balconies trimmed with slate tile and a spacious lobby and reception area featuring two by two ceiling posts, camel-stained wood, cherry wood book shelves and custom hand railings and staircase.

“They (developers) let me do it right,” Dasen said. “My favorite par t of the building is the owners. Jim Landin did a fabulous job designing the building and then everything else fell into place. I love the front and I think I like the back even better.” Brooks Resources’ architectural guidelines dictated a prominent entrance from Allen Road plus parking in the rear, so it meant that Landin had to design two distinctive entry ways with ADA-compliance issues and fit the building into a rather small in-fill site while matching all the fixed points of two existing neighbors.

“Considering the size and uniqueness of the lot, I think the building has a lot of flexibility,” Landin said. “There was obviously the constraints of existing neighborhood buildings, but I think we did a good job of fabricating the building into the site.” Garrow and McCarty, cousins who both grew up in families with seven children, said they spent months looking for an existing building to purchase but were unsuccessful in finding a structure that fit their needs. They decided to purchase one of the last remaining lots in Shevlin Riverfront Plaza and then interviewed several architectural firms before choosing GGL Architecture.

“We were more concerned about the inside of the building and its potential efficiency,” Garrow said. “The views were a by-product of the location.” McCarty said they both agreed on one principle: They didn’t want to build a big-box structure but rather elected to customize the building to give it character. Garrow said the decision to hire Spring River Builders was relatively easy. Dasen had re-modeled Garrow’s home about 15 years ago, and Garrow knew several of the long-time subcontractors who have worked for Dasen over the years.

“Mike showed us some of the impressive homes that he has built, and we knew about his great relationship with his subcontractors, so going with Spring Valley Builders was an easy decision,” McCarty said. Garrow, who specializes in workers compensation and social security, and McCarty, a specialist in domestic relation and landlord/tenant law, decided to name the building in honor of their grandmother, Veva Portwood, who had such a profound influence on them as youngsters and their families.

“Through all the years, we’ve maintained a great family connection and felt this was a nice way to honor our grandmother,” Garrow said. The project took a little longer to complete than originally planned as the attorneys spent time with Landin tweaking some details, making some design changes and value engineering the finished product.

Most of the support staff for the two attorneys will work downstairs where a small conference room allows either of them to work one-on-one with clients. Garrow and McCarty will have their offices on the second floor where a larger conference room opens into an outdoor deck with great views of Mt. Bachelor. There is 700 square feet of space for lease with the flexibility of creating an entry off the rear, and Dasen available for tenant improvements. In the end, both attorneys are more than pleased with the support team that helped to create the project.

“I really like the ‘feel’ of what Mike has done, both inside and out,” Garrow said. “We’re sitting in a great location.” McCarty: “We worked hard on the layout and made several revisions in trying to get the maximum flexibility. In the end, I think we have a very customized office building that few can match.”