Consumer confidence is at a “tipping point” and is crucial to help lead the U.S. out of its current economic turmoil, says Umpqua Bank’s top official.

CEO Ray Davis said: “Consumer confidence has been deeply shaken, but the American consumer is notoriously resilient. They have dug us out of recession before, and will again.”

Davis – who recently addressed a packed forum at Bend’s Tower Theatre where he gave a local perspective on the national economic picture – said the media generally had done a “poor job” of reporting anything positive, instead focusing on a seeming deluge of bad news.

“There are a lot of good things going on in the economy right now,” said Davis, “The housing market is readjusting and we have seen buyer volume increase; mortgage rates are near records lows, helping a refinance surge; the government is engaged in addressing the economic issues, and the stimulus effort is starting to filter through.

“But when all the public sees on TV and hears in the media is negative coverage, it creates a kind of numbness and inertia.”

Davis accepts that there are some very real issues to grapple with – particularly on the employment front and in the housing market, which needs evidence of bottoming and continued absorption of excess inventory – but the public needs reassurance on reasons to be optimistic to lead the pull out of our current downturn.

He pins a lot of the current tribulations on stemming from a housing market that grew “unsustainably”, commenting: “I don’t have a crystal ball, but the problems probably originated back in 2003 and 2004 when there was push in Congress to encourage home ownership through initiatives like the Community Reinvestment Act. 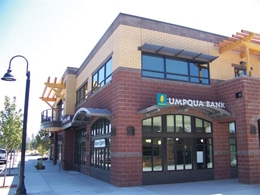 “This helped spur programs like the ‘no documentation’ or stated income loans, sometimes even termed ‘liar loans’ with little or no verification of income (or so-called alternative documentation) that made it easier to get into a house.

“Once the subprime business took off, supply and demand got out of whack. Places like Bend got overbuilt and prices skyrocketed.

“When growth becomes unsustainable it is going to crash at some point, and that is what happened with the housing market, which rippled through the entire economy.”

The speed at which the market dropped took everyone by surprise, but the “abuses” that occurred on Wall Street were a major contributory factor – now being addressed in the form of tighter regulation.

The national banks primarily created the environment, but Davis accepts that community banks such as Umpqua also played a part by making too many loans to speculative housing project developers.
Davis added: “It was predominantly residential development where we suffered our pain, but we recognized that fairly early and chose a strategy of dealing with the issue quickly.”

Indeed, it was back in early 2007 that Umpqua saw the writing on the wall and called a halt to residential development lending.

It reported that its balance sheet was likely to be negatively impacted by the exposure and as its stock price suffered, took steps to deal with the troubled assets.

Davis said dealing with the situation promptly helped the bank retain a solid base and, together with the fact that the institution is well-capitalized, “Wall Street is confident in our abilities.”

He also disputed a “myth” that the banks were all to blame for the current woes.

He added: “In the U.S., banks only represent a third of credit – two-thirds of consumer credit is from non-banks.

“That is where a lot of activity dried up and impacted consumer spending. Banks have never ‘frozen’ lending and our mortgage loan volume is in fact substantially up this quarter compared to last.”

He is encouraged that the government is now taking action via the latest stimulus initiative known as  TALF (Term Asset-Backed Securities Loan Facility) which may help get consumer credit rolling again. Known by some as the “consumer bailout,” TALF is aimed at helping financial markets dealing with consumer asset-backed securities like auto loans, credit-card debt, and student loans.

The new consumer program will allocate $200 billion to $1 trillion by the Federal Reserve to security holders of consumer backed debt, essentially seeking to insure the debt if a borrower defaults.

Meanwhile, Umpqua Bank is still very much focused on working with its core small-business customers, Davis said, but is also always looking at new ways to operate.

It recently announced the creation of a new “eco-banking” division aimed at offering financing for small businesses and homeowners to invest in energy efficiency and renewable energy projects through a variety of programs.

And after acquisitions in the northern and central California markets in recent years, Umpqua has also assembled a team of bankers with expertise in the wine industry – which could lead to more business in the blossoming vineyards of Oregon and Washington.

Owned by parent company Umpqua Holdings Corp., Umpqua Bank continues to be the largest regional bank in the Northwest, with deposits totaling some $6.67 billion as reported by the FDIC for year-end 2008.

It currently has over 150 outlets and has also expanded through taking over smaller banks and the ongoing opening of new branches, such as in Vancouver, Washington, and Sacramento, California set for this year.

Davis affirms Umpqua is well-capitalized and continually on the lookout for new lending teams and new markets – making it ideally placed to be in a strong position in the future when the economy returns to an upswing.

It also remains committed to its roots as a community bank, as exemplified by its contribution of 25,719 associate volunteer hours through its Connect Volunteer Network (Connect), an industry-leading volunteer program, in 2008.

Connect provides each full-time associate 40 hours of paid time off per year to serve at youth focused organizations, schools and community development programs.

\”I continue to be impressed by the incredible contributions our associates make in their communities through Umpqua\’s Connect Volunteer Network,\” said Davis.

\”As the economy continues to struggle and our schools and non-profit partners face even greater strain, it is important for the business community to rally together and support their work.

“Our associates have taken full advantage of their Connect volunteer time and I hope to see other businesses encouraging their employees to do the same.\”

Five years after the program\’s inception, the Connect Volunteer Network has donated a combined 80,904 volunteer hours and assisted more than 800 non-profit organizations and schools from Seattle to Sacramento.