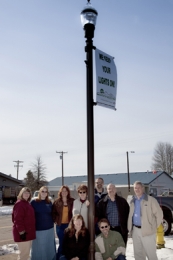 The La Pine Ford Leadership Team, a team of south Deschutes County “Citizen Leaders” recently announced the completion of the Huntington Road Lighting Project sponsored by the Ford Institute for Community Building.  The leadership team—seeded with a $5,000 challenge contribution from the Ford Foundation when they began their project almost a year and a half ago—raised $52,000 in cash and in kind services for the project.

One of the main contributing businesses was Midstate Electric, who provided $1,250 per light in contractor and installation services.  Midstate Electric’s Engineering Supervisor, Tom Weller, who led the design team for the lighting project said, “We wanted to enhance the safety of pedestrians by illuminating the intersections along Huntington Road. The lighting we chose was successful in meeting our goals to provide a low maintenance, long lasting, visually appealing lighting standard.”

Over forty other local businesses were involved—donating everything from cash to printing services to make this project happen—including Tony and Kathy DeBone’s, Little d Technology.  “The Ford Family Foundation Leadership Group has been a powerful experience for me,” says Kathy.  “I am thankful to have met and worked as a team with people who care about our community as much as I do.  I have learned new skills and concepts that I will always carry with me, both in my personal and business life.”
The Ford Institute for Community Building came into La Pine with the following mission statement: “to enhance the vitality of rural communities.” The Ford Institute operates within the framework of the following core values: integrity, stewardship, respect, independence and community. Their goal is to mentor leaders within rural communities. In January 2009, La Pine graduated the largest class to date—including the youngest, Carmen Pierce, and the oldest, Betty Skinner—to ever take part in this program.

After two months, and many ideas and concepts, the class adopted the “Huntington Road Lighting Project.” The purpose of the lighting project is to add light posts—complete with banner arms for seasonal and community advertising—on a dark stretch of road for the safety of the children, community members and local businesses. This project was full of many challenges, but the La Pine Leadership Group does not know how to let something go after they’ve sunk their teeth into it! The initial goal was to fund five lights along the corridor of Huntington Road between Ace Hardware and the intersection of Highway 97.

With the support of the business community, members and city, enough funds were raised to have 10 light poles installed. Banners have been displayed on the finished light posts, thanking the sponsors.

In addition to the funds raised to purchase and install the light poles, it was the vision of the group to raise enough funds to pay for the power charges on these light poles for the following 10 years. The team worked closely with Midstate Electric to research the amount of money required for a yearly fee per light. This figure was then added to the total purchase price of each light, thereby making these lights a true gift to the city of La Pine.

Ceremonial lighting of the first light took place December 5, 2009 at the annual La Pine Trucker’s Light Parade with Veronica Schneider reading the group’s mission and purpose before the lighting. Group participant Art Uecker, La Pine Insurance (and La Pine Chamber of Commerce President), said, “It has been an honor to be a part of such a tremendous group of community minded individuals.  We have managed to complete a project, which we believe sets the bar for all future Ford Family Foundation cohorts.  I would never have imagined when we started, that in this economic climate, we would be able to raise in cash and in kind donations in excess of $52,000.  The success and scope of this project is a testimony to what can be done when a group of civic minded citizens set their mind to it.  I would hope that in the months and years to come this success would serve as a template for other groups to achieve their goals as well.”

Another participant Robin Mirrasoul said, “The Ford Leadership Project took a bunch of strong personalities, taught us how to come together in cooperation for a single goal and build lasting friendships in the community.  It’s so exciting to see many of our Ford Group already starting to serve in additional ways, going on to serve with other community boards and projects and using new skills to be far more effective.  One of the really wonderful things that has come from the involvement of the Ford Family Leadership Project is a change in La Pine’s image in the area.  A refreshing, positive attitude in our community of pride and a can do attitude.  We really are a small town with a very
bright future.”

The community and the city of La Pine are now seeing a brighter future due to the lights on Huntington Road, and the leadership of the group, which inspired it.