You are at:Home»News Pages»E-Headlines»Colorado Dam Safe Passage Construction to Begin in Bend, Oregon
By CBN on September 25, 2014 E-Headlines

With recent project contract approval by its board of directors, Bend Park & Recreation District is announcing upcoming closure and detour plans for the Colorado Avenue Dam Safe Passage construction which will begin in October. The project will reconstruct the Colorado Dam to create three river channels – one for safe passage for floaters and fish passage, one for active recreation such as whitewater kayakers and one for wildlife habitat.

The project also includes construction of a new bicycle and pedestrian bridge and new park amenities at McKay Park on the river’s west side. The general contractor is Hamilton Construction and the principal engineer is Otak, Inc. The total funding for the project is $9,681,985 including Bend Paddle Trail Alliance’s fundraising commitment of $1,133,737. The project is anticipated to be completed by fall of 2015, however, work will continue in McKay Park and along the Deschutes River Trail into 2016.

On Wednesday, October 1, Hamilton Construction will begin to mobilize on site. For the first two weeks of October, work will include trail construction, trailer installation, fencing, signage, installation of temporary access path to Colorado Ave. bridge and various preparations for project closures and detours. Closures and detours are anticipated to begin in the first half of October. Street access in the area is expected to remain open with temporary closures using flaggers. 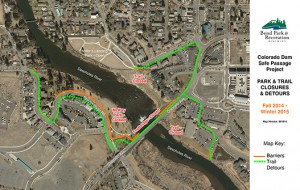 Starting this fall through spring 2015, river access will be limited from approximately 600 feet upriver of the Colorado Dam to downriver of McKay Park. A detour corridor to access the downstream reach of the river will be available through McKay Park.

Detours will include area trails and pathways:
• on east and west sides of the river including the Deschutes River Trail
• to Miller’s Landing Park
• to the Old Mill District
• around McKay Park.

Footbridge traffic will be detoured to the sidewalk and bike lane on the north side of the Colorado Ave. bridge. A temporary path will be built on the west side of the bridge for access from Shevlin Hixon Rd. and McKay Park.