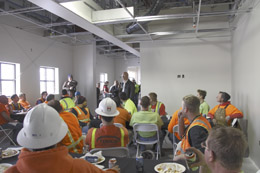 The construction of BendBroadband’s Vault data center is nearly complete due in large part to the efforts of more than 120 Central Oregon-based contractors said Amy Tykeson, president and CEO of BendBroadband at a recent luncheon honoring the numerous contractors working on the project.  Tykeson spoke to the subcontractors acknowledging their quality work, cooperative efforts and willingness to keep the project on a fast track for completion.

BendBroadband Vault, which is seeking a Leadership in Energy and Environmental Design (LEED) Gold certification, is a collocation data center which will begin operations in early-April in NE Bend.

The company announced that installation of the energy-efficient KyotoCooling system is underway. Testing of all equipment is scheduled for the remainder of March as the April opening approaches. Paul Israel, president and founder of Sunlight Solar Energy based in Bend, noted that any type of energy efficiency decreases the overall usage of electricity and ergo makes the solar contribution a higher percentage of the overall energy mix.

“One of the main benefits of this job,” Israel added, “was that it not only protected local jobs, but the size of the job, the largest in Central Oregon, will help Sunlight Solar land the larger jobs throughout the State that oftentimes go to California companies.“

“BendBroadband has partnered with local contracting companies throughout the design and construction of this environmentally-responsible data center,” commented Leonard Weitman, VP technical operations and project manager for the BendBroadband Vault project. “The project has relied on the expertise of more than 150 construction workers and 80 percent have been local Central Oregonians. The BendBroadband Vault project has utilized 27 contracting companies and 23 of those companies are local.”

Weitman explained that data centers require very complex facilities systems including high power capacity and redundant electrical and cooling and ventilation systems.  “This is required in order to accomplish the high reliability and security goals that will make the services marketable,” explained Weitman.  “Also, the electrical system is massive and requires unusual construction methods and high quality standards.  The data center industry has levels of certification to denote the degree of reliability.  To meet market requirements, we needed the facility to meet or exceed Tier-III standards.

“To make sure the Vault was constructed to these high standards, we wanted to be sure the general contractor had experience with facilities of this nature.  Hoffman Construction Company has had many years of constructing semiconductor manufacturing facilities and data centers for very demanding customers.  These types of complex facilities are similar in many ways.  Because of their years of experience constructing these types of highly technical and reliable facilities for demanding customers, we had a high degree of confidence that Hoffman would be able to meet our requirements.  That has proved to be the case.

“To mitigate bringing in a general contracting firm from outside of Central Oregon, as part of the selection process and our contract with them, we required them to use as many local sub-contractors as possible.  They have been very successful in using mostly local sub-contractors and guiding them through the construction techniques required to meet Tier-III requirements.

“Overall we’ve been very satisfied with the ability of Hoffman personnel to deliver the high quality of work performed on the project, to keep the project on schedule, and to keep it within budget requirements.  It’s everything we had hoped for.”

In further evidence of the economic impact of the Vault project, Weitman noted that BendBroadband has invested more than $10 million dollars on the project’s construction phase alone with more than $7 million dollars going directly to Central Oregon firms.

Designed to be a Tier 3, SSAE-16 Type II-certified facility, the 30,000 square foot BendBroadband Vault has been constructed in three phases and designed to meet the federally-mandated data storage and security needs for the healthcare industry as well as the financial, telecommunications, manufacturing and hospitality sectors, among others.

St. Charles Health System will be an anchor tenant in the new facility reported Sean Handley, director of sales and business services for BendBroadband. Handley reported that several other companies are actively interested in securing their data at the site and he’s looking forward to bringing businesses from all over the country to look at the new Vault data center.